Use your subwoofer to get better midbass

I'm pretty heavy in to the car audio 'scene'; competing and going to various events.  As most of you can imagine, in car audio usually the subwoofer is in the trunk area.  Because of this, many tend to cross their door-mounted or kickpanel mounted midbass lower (usually 60hz or so) in order to keep the subwoofer from playing too high and get the bass "up front".  I made a video recently discussing this and why, though it may seem logical, it actually results in worse performance in regards to the 'bass up front' illusion and how/why you can use your subwoofer to improve midbass performance.

This isn’t truly a shocking revelation.  Plenty of people already do what I suggest.  It just goes against intuition and against some beliefs in the car audio community that a subwoofer should not play too high in frequency because it can cause the bass to be localized behind you.

The reason why is due to one MAJOR issue in car audio: the “Nearside Null”. This is the large dip in response of the driver’s side midbass speaker that occurs typically in the 70-90hz region.  This doesn't occur in every car; there are certainly exceptions to the more extreme car installs.

Generally speaking, the lower your crossover point between midbass and subwoofer, the more noticeable this occurrence is. Unfortunately, this isn’t something you can simply “EQ out”, either. Throwing +6dB at this null may only result in 1dB of actual gain; that means you’re wasting a LOT of power and risking damage to your speaker for no acoustical gain. Some of you may even think to yourselves “seems like you’re not getting much by crossing the midbass low. Maybe there’s not as much benefit as I thought in doing that”. That’s a logical assumption and a lot of times that’s actually true. Crossing the midbass too low can actually result in more “bass behind you”! And you can also take some of the strain off your midbass by crossing them at or above the null. Ironically, we in car audio tend to cross midbass low to get the “up front” bass we so much desire. BUT, IN FACT, the majority of the time you have bass that pulls to the rear is BECAUSE of the midbass nulls. I know that sounds counteractive. But it’s the truth. Standing waves are problematic and this is one symptom of them; whether in home or car audio.

Contrary to popular belief, raising the subwoofer crossover in to the region that this null occurs can actually HELP the sound to stay focused and achieve “up front” bass. If you can move your subwoofer to a location where it is null-free through a frequency above the Nearside Null then you can likely improve midbass without negatively impacting the “up front bass” effect that so many are after. And you can also take some of the strain off your midbass by crossing them at or above the null frequency. Not all have the luxury of space to move the subwoofer around much but experimentation is key here; you may be surprised at the difference subwoofer placement in the trunk can make.

And one important conclusion here is that placing the rear mounted subwoofer on the opposite side of the listening position often results in better response! 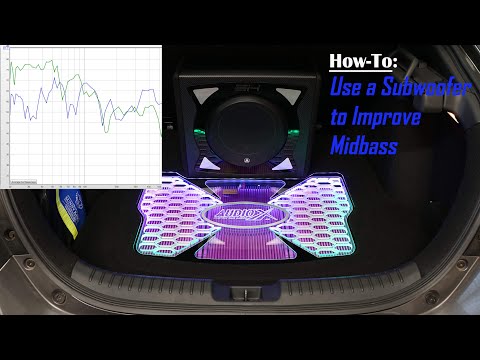