I have been using LMS and picoreplayer for a while. Also using DIY or cheap amps, so no remote control.

A log time ago found a LMS plugin that allows to run scripts in LMS on player events (for example on/off). The Plugin is called SqueezedVera, unfortunately the website is now defunct an no longer developed.

Luckily I had a backup in a HDD so I can use it, it just needed some corrections to work in new LMS/Perl environments.

The first time I found SqueezedVera I used it to trigger GPIO pins in a RPI and with it trigger a relay to mains allowing me to toggle the amp with the player on/off button in LMS.

This worked well, but since picoreplayer uses tinycore and squashfs it becomes cumbersome to add html documents to trigger the GPIO pins. So a new options had to be found.

Then I found Tasmota, an open source solution to take your smart ESP8266 devices out of the cloud, and decided to give it a test.

After looking at the device templates I got an Awow X5P smart plug. It is cheap in amazon.

Then following this video flashed the plug with Tasmota.

Then you need to configure the device with a template and now I can power on/off using a URL:

So, now just create a simple bash script to use curl to "visit" these URL:

Setup a static DHCP entry for your device to prevent it from changing IP and invalidating your script.

And set the SqueezedVera parameters to trigger them: 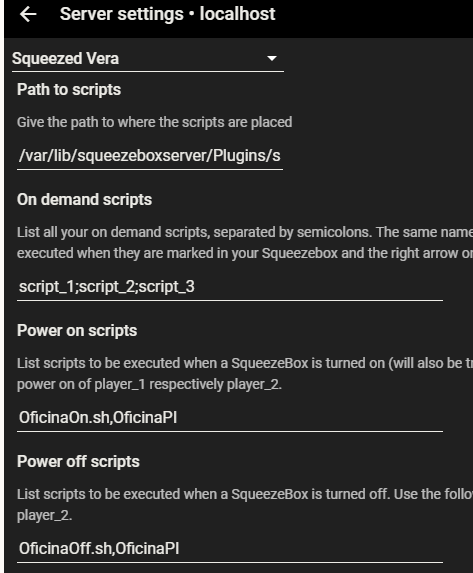 Works like a charm, just got this setup, so no idea if it will be reliable enough.