I wanted to share the details of the Desktop Obelisk 2.1ch system I brought to inDIYana. The satellites each use:
2x Techtonic TEBM28 and 2x Dayton ND65PR passive radiators. There's no added mass on the radiators, so they are tuned to around 130Hz in the 0.34l enclosure. 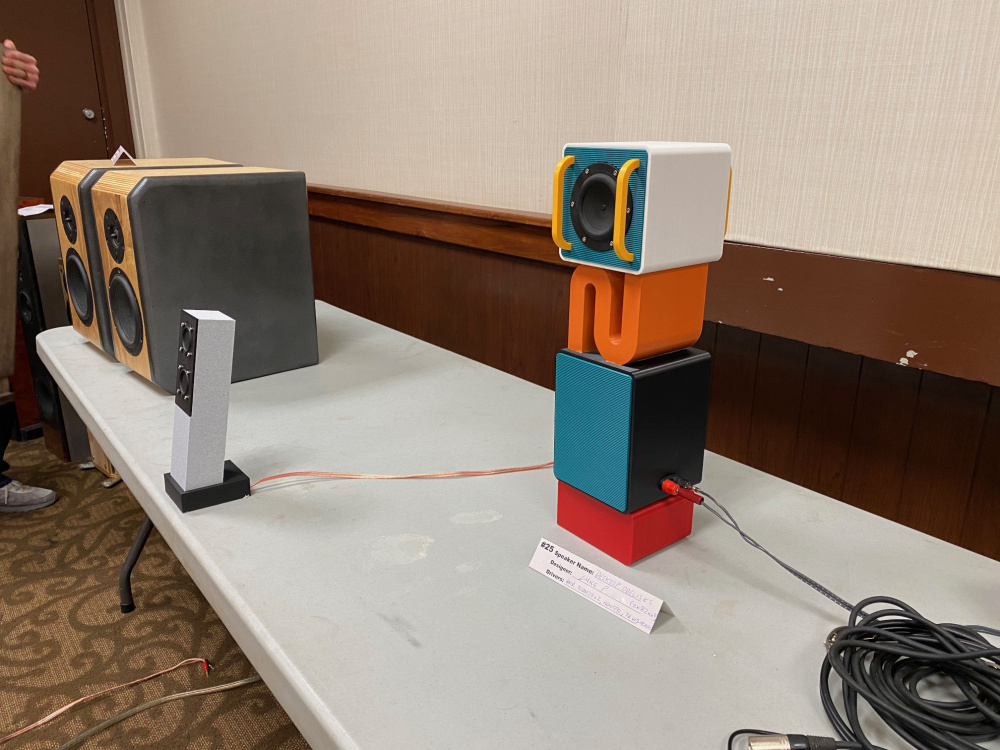 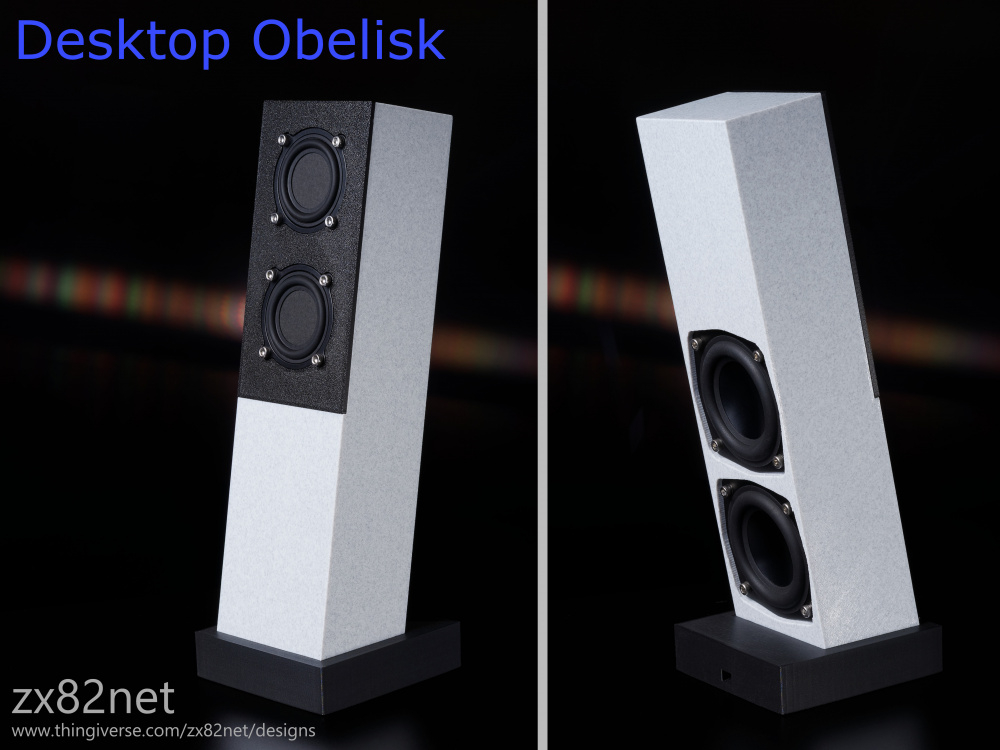 The "crossover" just a 15uF capacitor across one of the drivers, to prevent comb filtering. The drivers are wired in series. Here's the impedance plot: 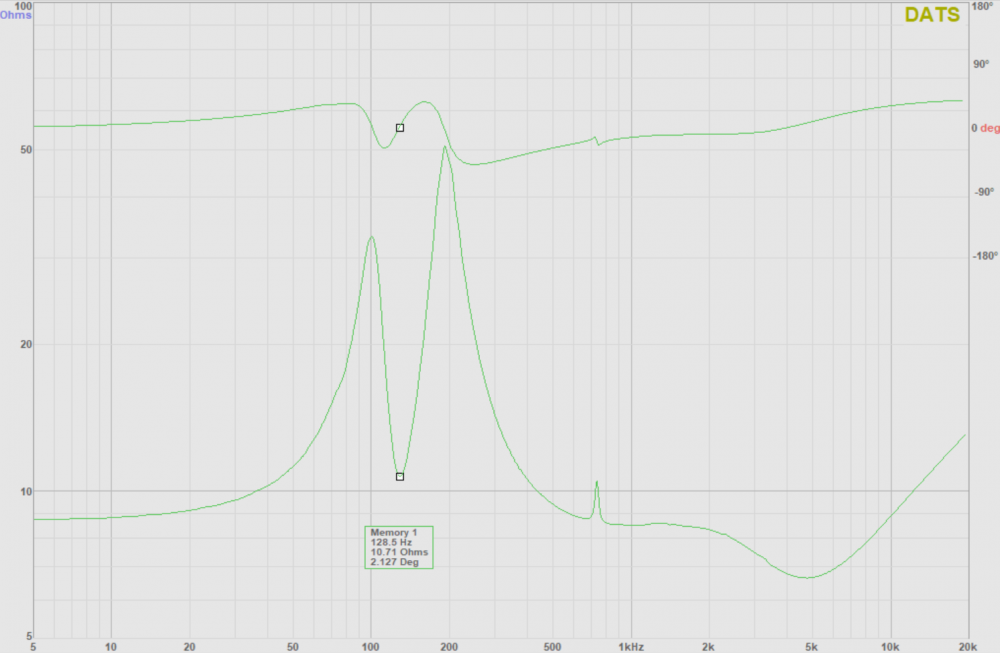 I EQ’d the satellites based on measurements with my UMIK-1. The total dynamic range of the EQ is ~11dB, with the highest point at 8kHz. Here's the EQ curve and the measured frequency response: 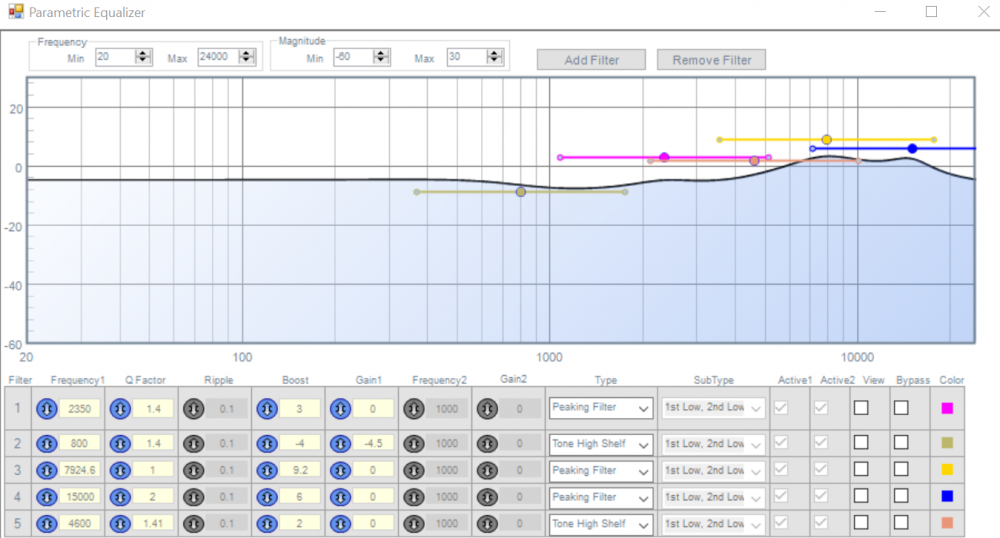 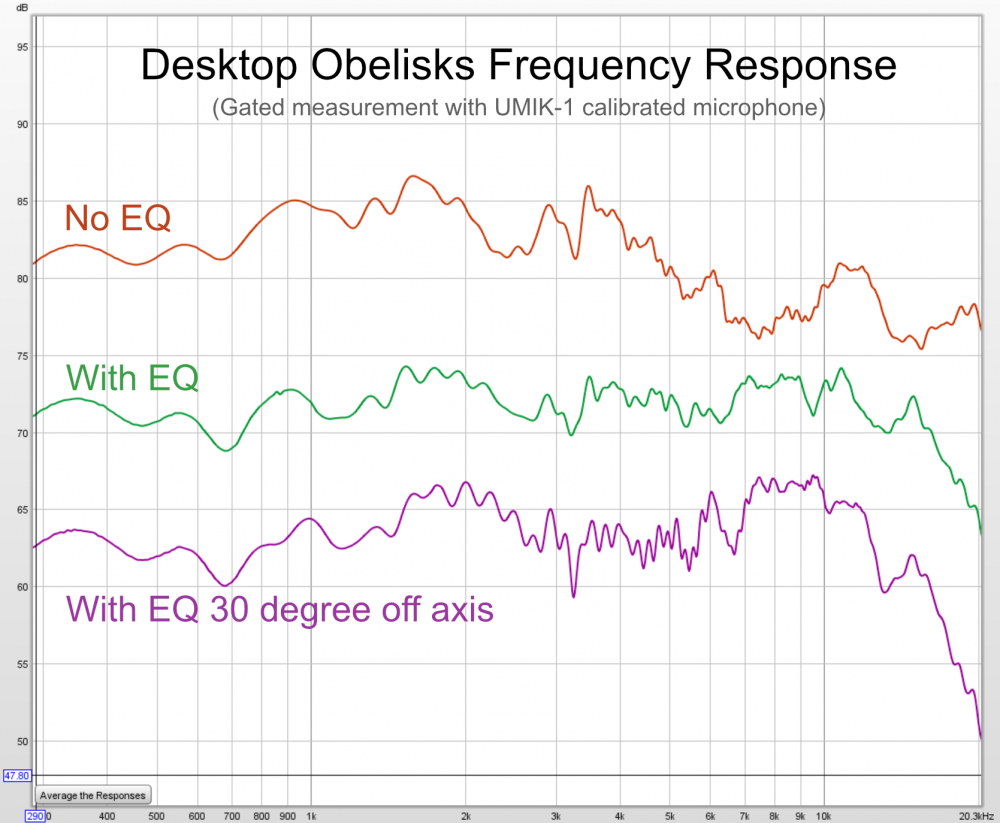 The enclosure is fully 3D printed, the enclosure prints as one piece and the base is a second piece that screws onto the enclosure, here's a shot of the internals in CAD, you can see I'm cutting it quite fine for clearance for the threaded rod on the back of the PR: 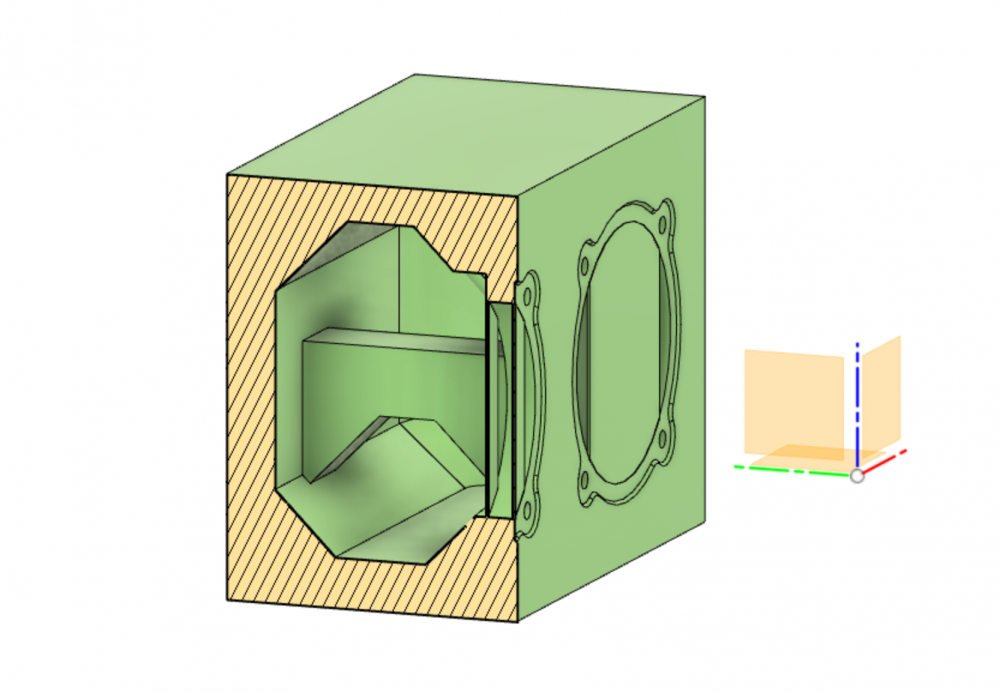 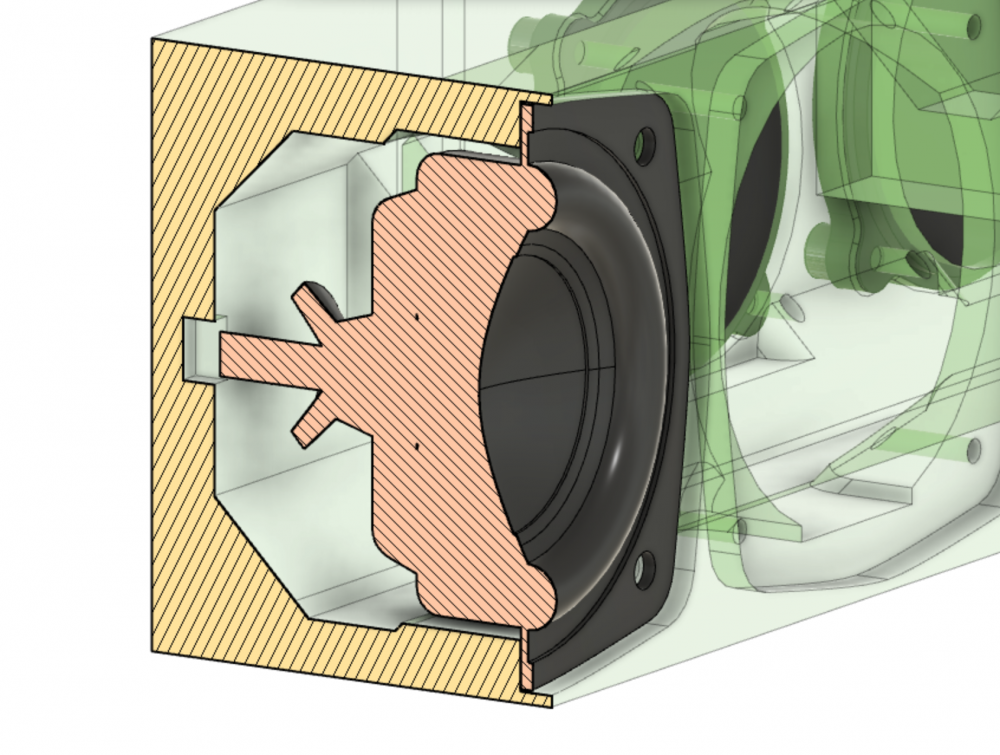 The models are available here for for download and printing:
https://www.thingiverse.com/thing:4762555

The Desktop Obelisk is double barreled version of the P-CUBE, a super-cute 65mm cube speaker I published here:
https://www.instructables.com/P-CUBE-Speaker-System/ 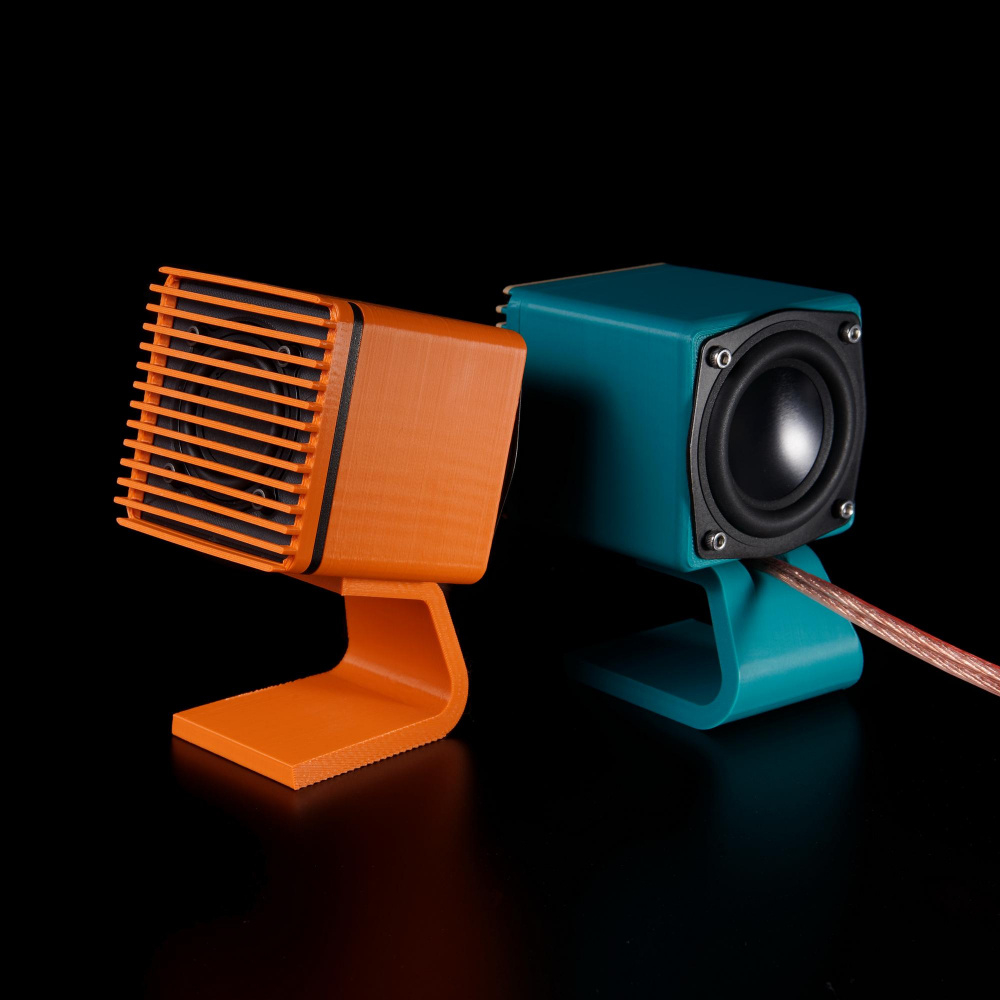 The sub-woofer uses two W3-1876S’s mounted back to back for force cancelation. It is a dual bass reflex (DBR) with a passive chamber connected to the driven chamber by a port, and ported to the outside world. The acoustic design is by Peter Kulicki.
The driven chamber is 1.4l, the passive chamber is 2.0l, both ports have a length of 345mm, and a crossection of 1570mm^2, equivalent to ~45mm diameter circular port. The two tuning frequencies are around 50Hz and 125Hz. Here is an impedance plot: 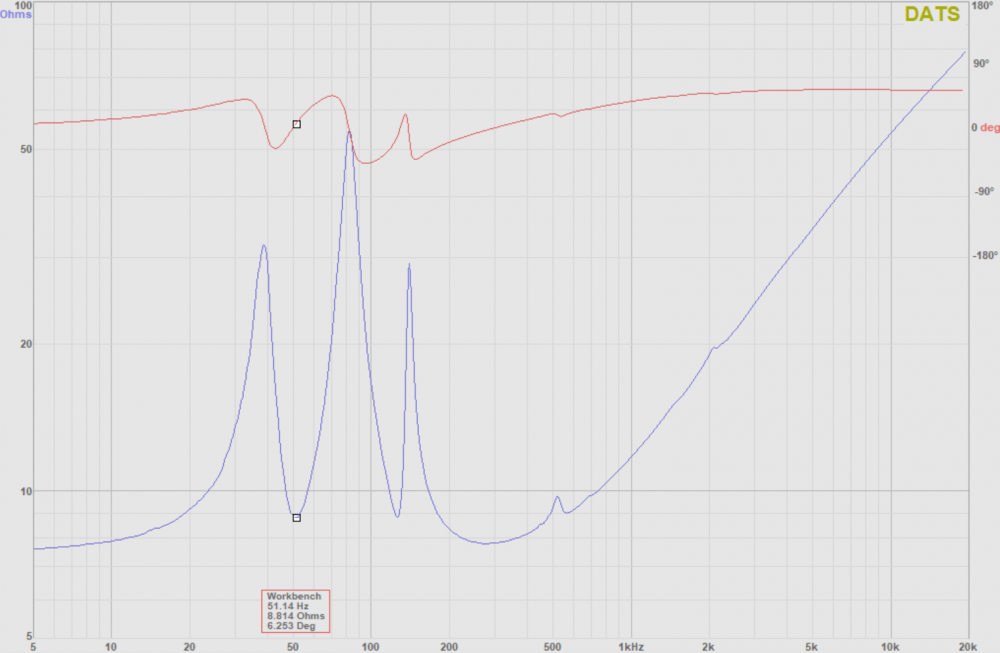 Peter presented the design on his YouTube channel here: 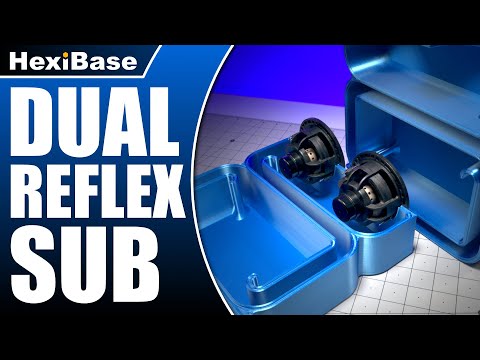 Double bass reflex designs are not that well documented on the internet, Peter gives his own brief explanation here, citing it as a way of broadening the passband of a subwoofer: 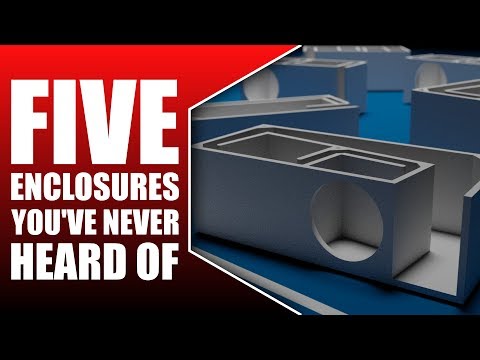 The setup is driven by a Wondom JAB5 class D amp, 4x100W with built in bluetooth and DSP:
https://store.sure-electronics.com/product/AA-JA33286
I decided to live life dangerously and removed the temperature controlled fan from the heatsink.
The sub/sat crossover was provided by the DSP. I previously ran the crossover as 24db/octave at 140Hz. For inDIYana, I increased the crossover to 150Hz and 48dB/octave, to get a little more power handling out of the satellites. Here's a shot of the Sigma Studio Project:

The front panel controls I put on the amp are master volume (tops out at unity), a volume boost, to allow me to go above unity for low volume sources, and independent gain for HF and LF channels.

I was using a 24V 6A power supply, which was probably the short pole in the set-up, but may have saved my from blowing a driver :-D