So I ordered a pair the other night (Founder's 7.5% Centennial IPA may have been a part of that decision) of the new GRS 12SW-4HE 12" subwoofers. Notwithstanding the bullshit Xmax claims, the driver looks like it has good bones. Deep draw basket with plenty of venting for a stamped design, bumped back plate, 2" coil, double magnet. The advertised Xmax is 12.5mm - but realistically it is likely around 10mm. I will measure the top plate and deduct from the advertised Xmax the dubious addition of "+1/3 top plate".

Anyways, the driver as advertised has really, really nice T/S parameters. It isn't optimized for small bass reflex like a lot of modern subwoofers - but what we lose in small size we gain in extension (Hoffman in the house).

I've been running through models this morning waiting for mama to wake up so we can do our normal Saturday thing, and I am generally impressed. For example, in 1 cubic foot sealed it will have an F3 of a little less than 40Hz and Q of 0.8. This indicates phenomenal performance in a typical automotive environment without eating up space.

Bumping the sealed to 1.5 cubic feet (still a manageable size for automotive) yields F3 of 37Hz. This would also make a compact, wide-range, high output monitor possible. Throw a coaxial in the cabinet with it, and I think it would be a remarkably satisfying small form factor 3-way. It kind of sucks that Dayton no longer sells the 5" coaxial, but the 4" would probably work almost as well. I have a pair of the 4", I am sorely tempted to build this version. Set them on some stands and go bonkers with the volume control...

...skip the stands and build some ported monkey coffins at 3 cubic feet tuned to 20Hz. For maximum output it would require a 4" diameter port 25" long, but in a 3 cubic foot cabinet it should be easy enough to fold on in there. So here are some WinISD charts on this possible design: 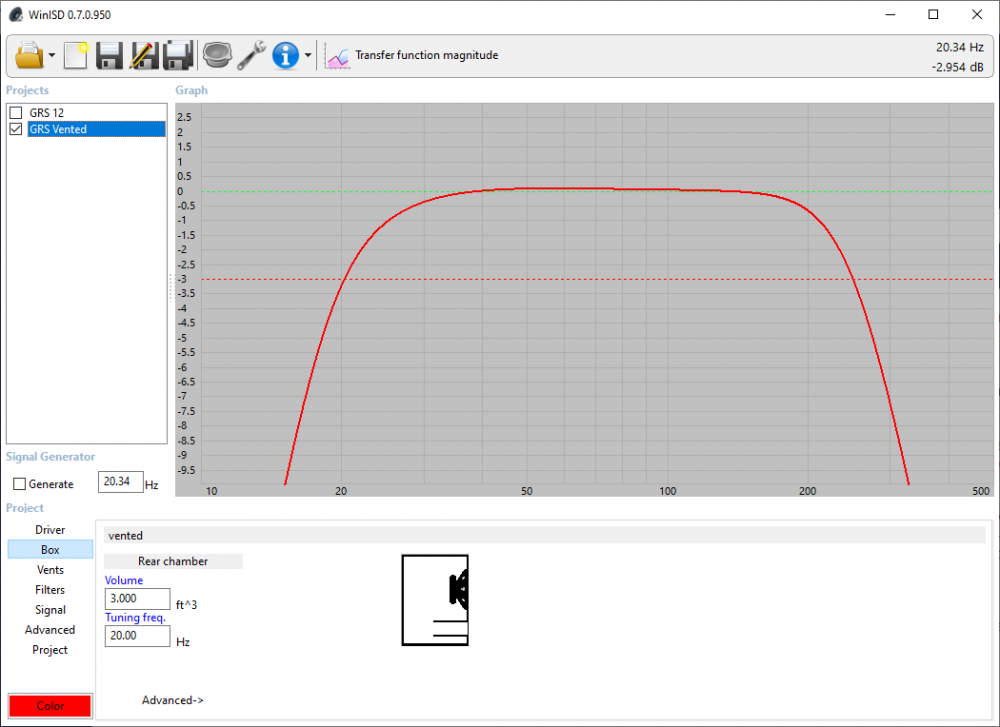 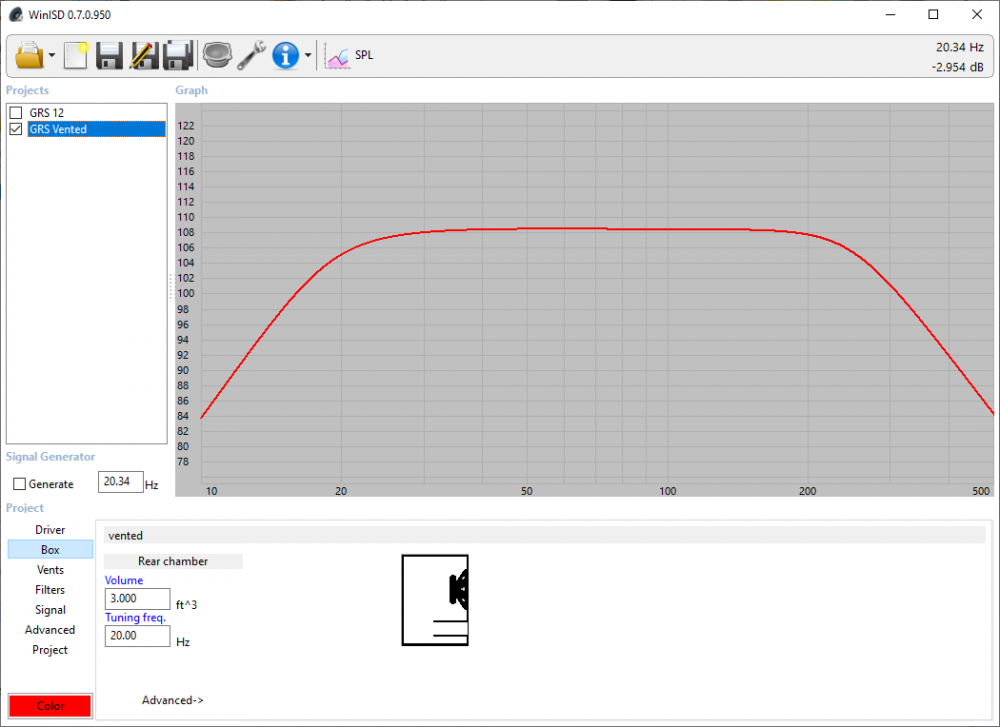 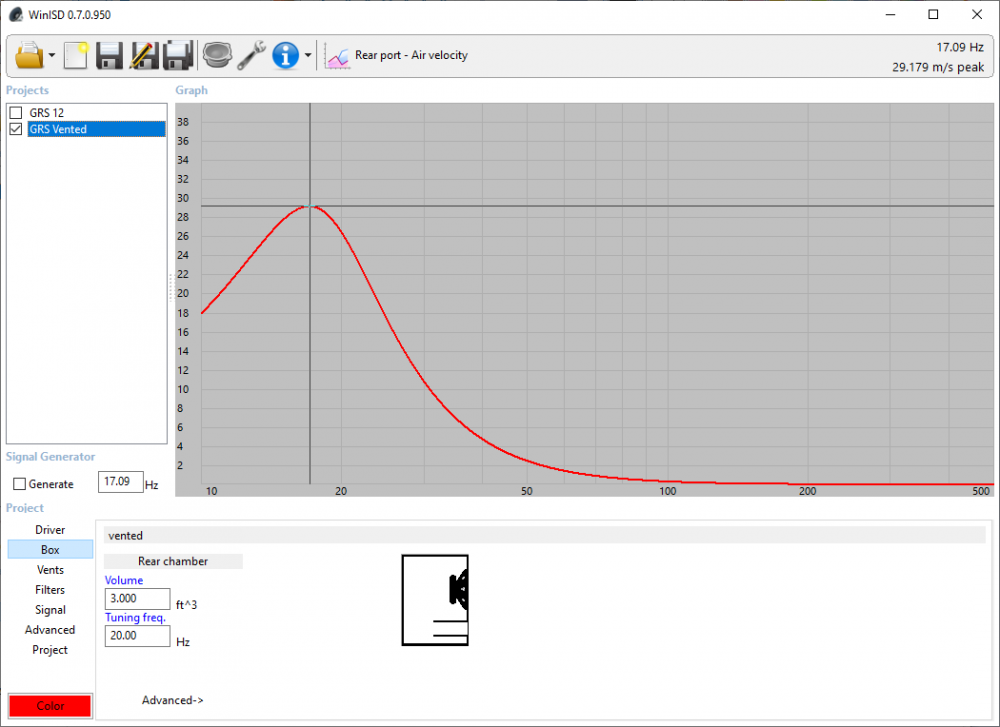 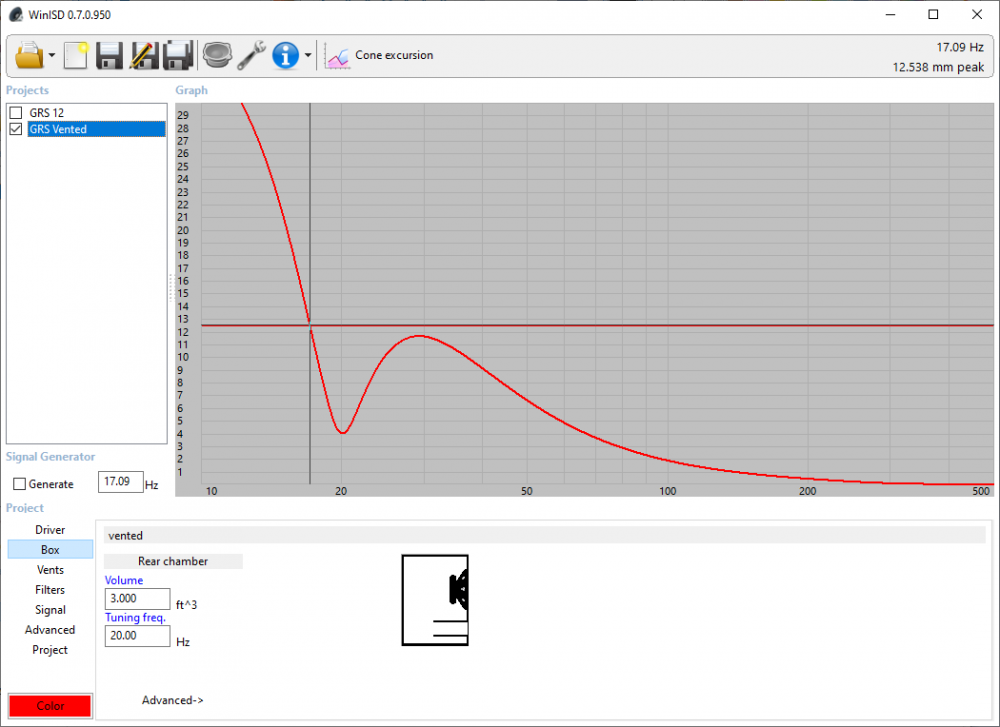 Couple of observations based on these models...

Even if port chuffing becomes an issue at maximum output, it would occur infrasonically so it is debatable if it would be an issue. The amount of signal present to excite things at 17Hz will be pretty minimal. Even for action movies it is unlikely to be a concern. Combined with the F3 approaching infrasonic, this alignment would make an excellent home theater subwoofer if you have 3 cubic to spare.

It exceeds what is likely real Xmax briefly in the passband, centered at 30Hz. Above that, no sweat. It should play the majority of music at a very high volume without approaching real Xmax, much less the dubious advertised Xmax. This alignment should also make for a serious party speaker capable of playing pretty much any genre at a very high volume without mechanical concerns. I predict many monkey coffins being built using this driver.

The above are modeled as if they were fully active - what happens with some series resistance? I added 1 ohm to simulate a large, laminate core coil around the 6mH range (as if I were using a 250Hz low pass).

The 1 cubic foot sealed pushes Q to nearly 1, with F3 of 35Hz and a ripple of 1.1db centered at 64Hz. This starts making a very small monitor more and more attractive.

Adding the series resistance to the 3 cubes ported model, we have a 1.5db peak at 35Hz but F3 is pushed just below 20Hz.

So, for $40 I really doubt you will find a more flexible 12" woofer that performs this well in sealed and vented applications. If you are looking for an affordable subwoofer capable of near infrasonic performance (and I'll be honest, infrasonic for my 46 year old ears is 30Hz these days, not 20) or want to build a really cool monitor that does not take up your entire home studio but will also play to 35Hz this is the driver.

Plus, with the pulpy paper cone it has a classic look. The inverted dustcap is ass ugly and I will replace with convex style, but otherwise it is a very nice looking driver. Fat surround, pulp cone, big magnet - this is a serious throwback design from my car audio days in the 90's. Love the look. Love the flexibility (based on advertised parameters anyways), and love the fricken' $40 price-tag.

If using the Dayton 4" coaxial as the TM portion, you could potentially have a monkey coffin with a 20Hz to 20000Hz response curve and capable of 105+ db output across the entire bandwidth using $150 in drivers. With the coaxial TM portion you have some nice options to control directivity, as well. With the large coil placed in series with the woofer, it even has the advantage of raising impedance to a nominal 5ohm (or higher). I have not run into a single issue over the last 15 years testing 4 ohm drivers and building 4 ohm designs running cheap AV receivers, but the slightly increased impedance will at least put some peoples mind at rest.

In my minds eye, I am seeing this as a legitimate contender in the world of 3-way monkey coffins. I used 250hz as the upper limit based on inductance, that may be the deal breaker on this driver though - I am neither optimistic or pessimistic, I chose 250Hz just because. Crossing lower than that would probably warrant going active or semi-active so value starts declining. I would imagine, though, that hitting 200-300 hz is feasible.

TL;DR The new GRS 12" paper cone subwoofer is, while not quite a game changer, is a legitimate beast-mode(r) driver. Build a bigass 3-way using it. Throw it in the trunk of your car. Impress your musician friends with how badass a 12" monitor can be that does not take up an entire wall of their studio.