I have had a love/hate relationship with the Dayton ND16FA-6.

On the plus side: It is generally a nice sounding tweeter with wide dispersion (it is a 5/8" dome after all), will fit almost anywhere, and is under $10 (although creeping closer to that mark at $9.98 at the time of this post).

For a long time, I thought that was the only minus and that tweeter seemed to acquit itself pretty well in the Helium design which many people have built and reportedly enjoyed. My experiences this year have cast a different light on the ND16. First, I threw in a Helium when I sent out the modified HiVi DIY 3.1 out west for a spin on the Klippel NFS for Audio Science Review. As fate would have it, I sent out the "other" speaker than the one I measured and used for the design. It turned out that the speaker I sent measured differently than the other one.

Given how my Heliums are currently assembled, it would be very difficult to directly measure the tweeter with the dip around 6-8 kHz, so I haven't really confirmed that the issue is the tweeter. The impedance measurements of the two speakers were close enough that it is likely that the issue was tweeter variation, rather than a crossover issue.

I did another ND16 design for Mike Burke, a fellow Iowan who has attended an Iowa DIY event. He had a pair of ND16's and Aura NS3's. I had those drivers on hand, so I mocked something up and came up with a Helium-like design using those drivers that Mike posted on Tech Talk. We called them the Neons. Here is a picture of my mockups, which came to be because I had an old JVC shelf system in which I replaced the stock 3" full range driver with an NS3 (which was a serious improvement, even unfiltered). The ND16 was added with a 1 1/4 forstner bit and a little sweat and cussing. These are rear ported with a tuning frequency similar to the Heliums. 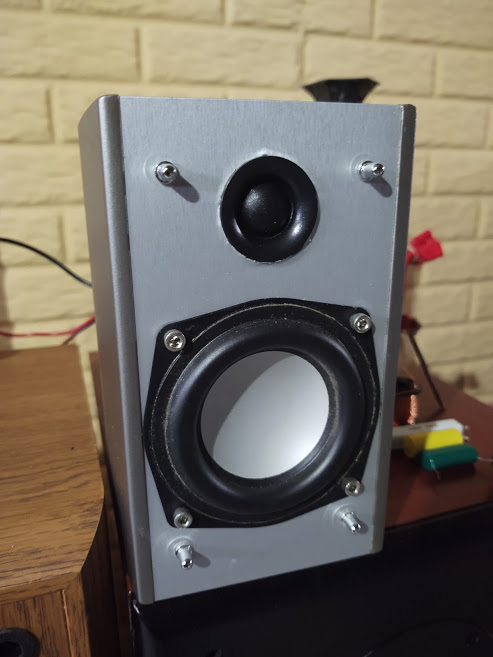 After the ASR review of the Helium, I decided to mess around with the Neons a little more and see if I could come up with a flatter response and lower crossover point to help with directivity matching between the NS3 and the ND16. I have something I think is quite good. 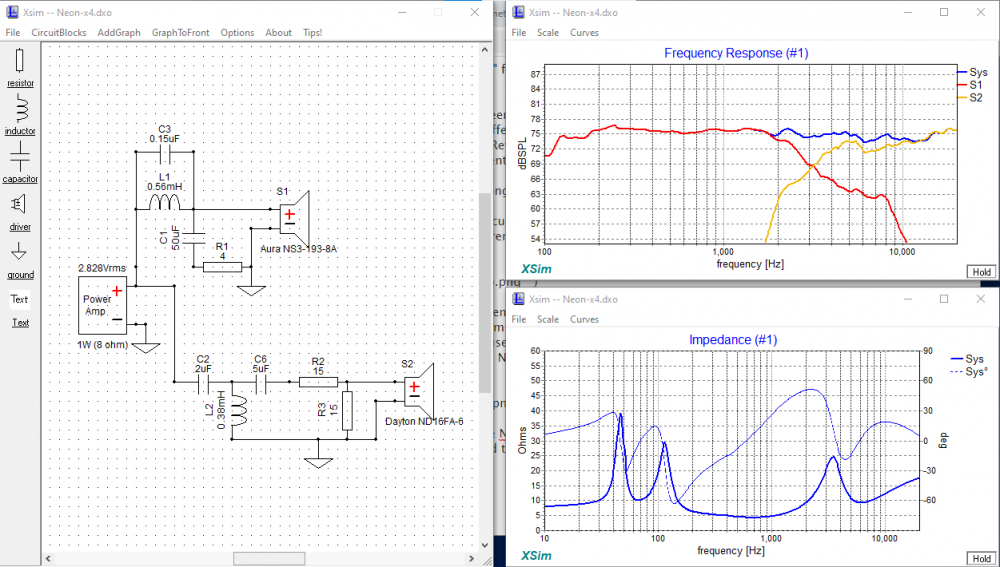 Enter the ND16... I took measurements of both speakers. The red curve is the "other" speaker. The discrepancy is at a different frequency range than the Heliums, but there is one...

This time, the crossovers are not yet assembled and shoehorned into the cabinet, so we can isolate the individual tweeter responses.

...and there you have it. The tweeters are different after all.

So, if I ever publish a final version of the Neon, it will have to be with a different tweeter. I was thinking the Peerless DX20 would make a lot of sense. Any other suggestions?