Working on my first TMWW. Trying to follow the VituixCAD instructions very closely but going back over things I think I made a mistake during measurement. Once I get this figured out, I'll likely have other xo related questions.

For the two woofers:

Doing some more research on forums (not the manual), while the nearfield should be measured this way, Kimmo recommends the far field be measured by disconnecting the bottom woofer rather than using the pillow. He suggest the effect of the disconnected woofer acting like a passive radiator will be irrelevant once merged since its effect is only around tuning like a port.

In my case...I have SPL of only one driver, but because it was still wired in parallel I still have +3db due to the lower impedance. So when I add my driver, I need to scale impedance by 2, and scale SPL by -3db.

Does that sound right??

Is the image below the right way to enter two drivers in parallel, setting each's y-offset correctly? 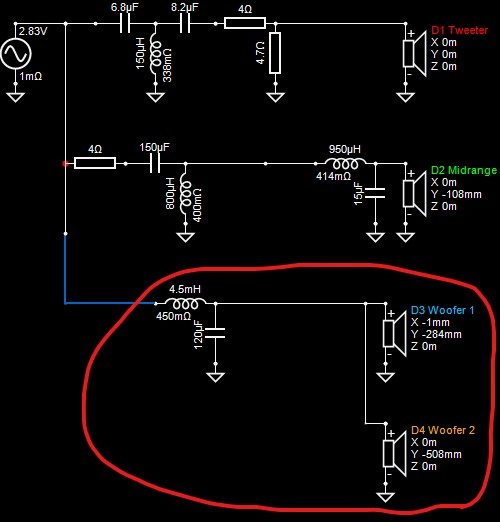