This speaker, like many of mine, comprises of speakers obtained via classified ads, seconds hand etc to save a few bucks over retail new costs. I try to only buy items that I have a plan for, not just because it's a good deal. I had been using a pair of NHT Xds speakers at my computer since my recent relocation, and while they are a great speaker, they’re small and sealed so don’t have much for low end punch, even when I added some EQ. I wanted something a bit more substantial to enjoy while I work.

Enter the Wavecor WF152BD04. I think I got these from Leon, don’t remember what I paid, but they’re worth every penny spent. This is a 4 ohms midwoofer with excellent specs allowing for a nice deep response in a small enclosure. It modelled out to a extend down to 40Hz in only 11 Litres. The response is smooth with mild breakup and the a clean low distortion sound. This is a top drawer midwoofer let me tell you! 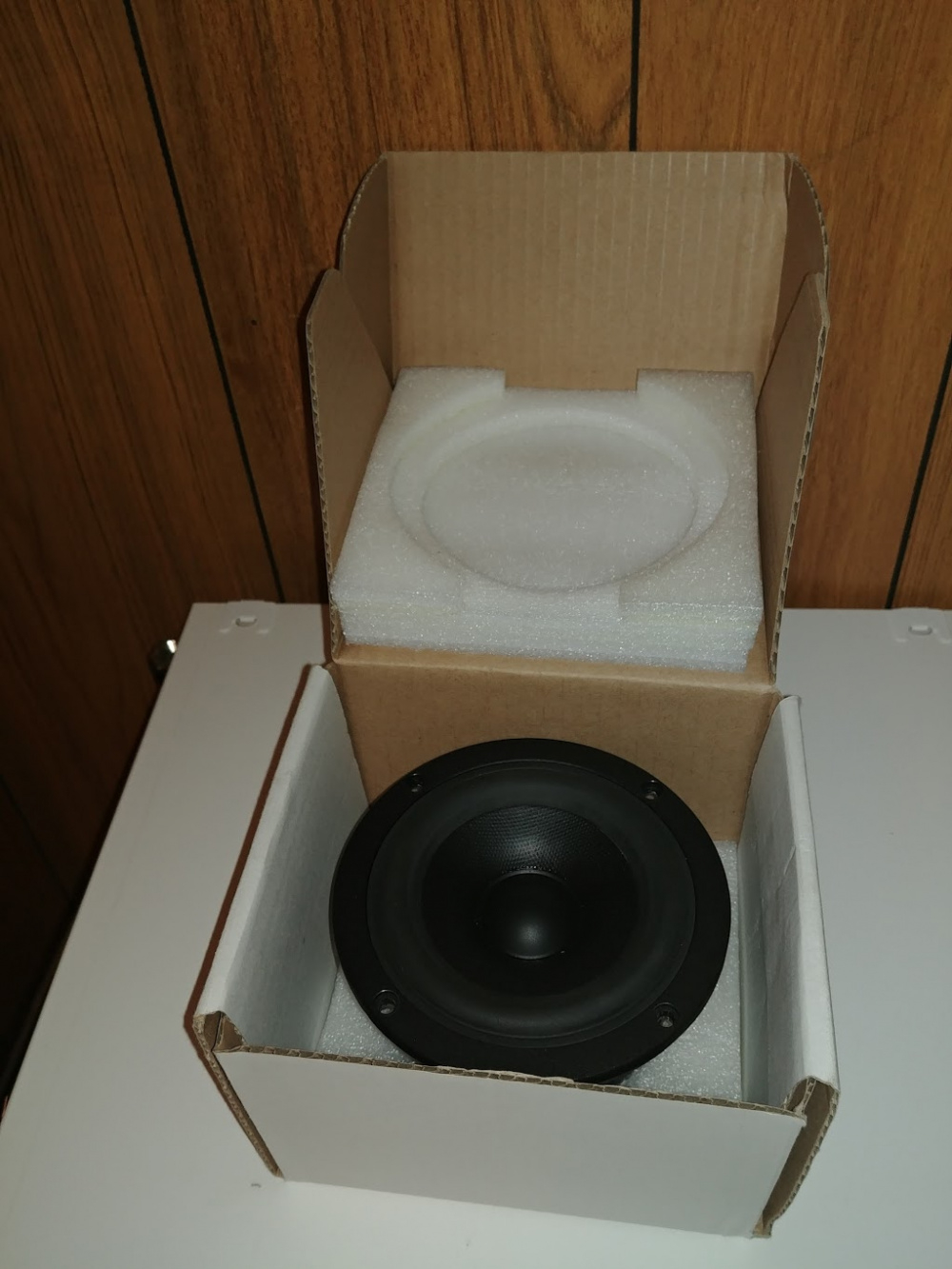 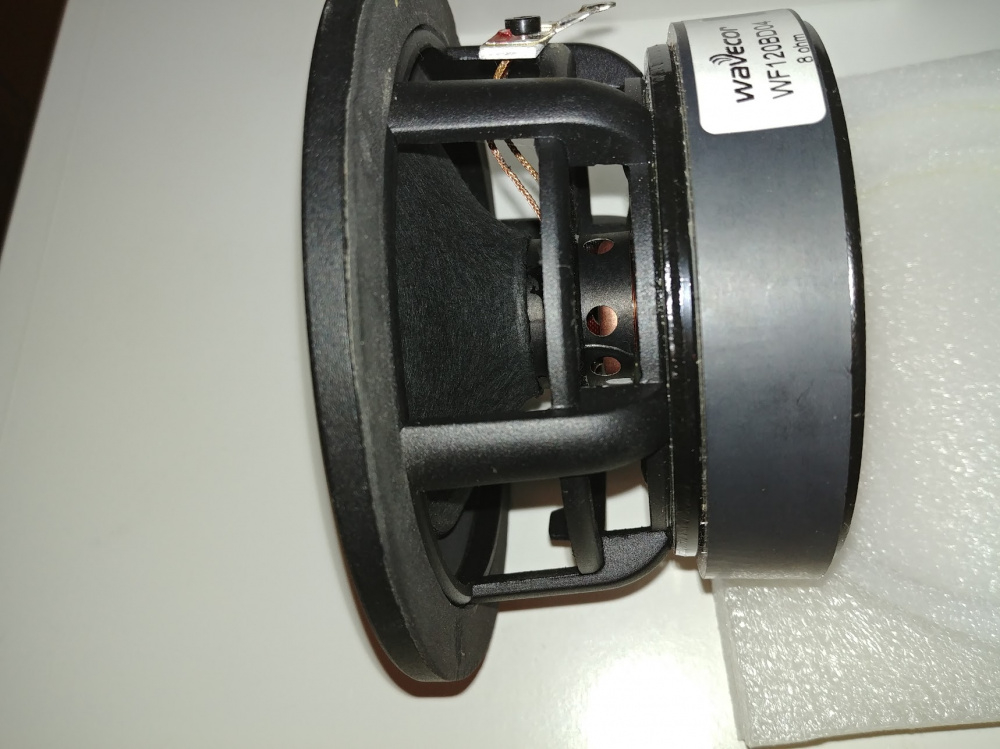 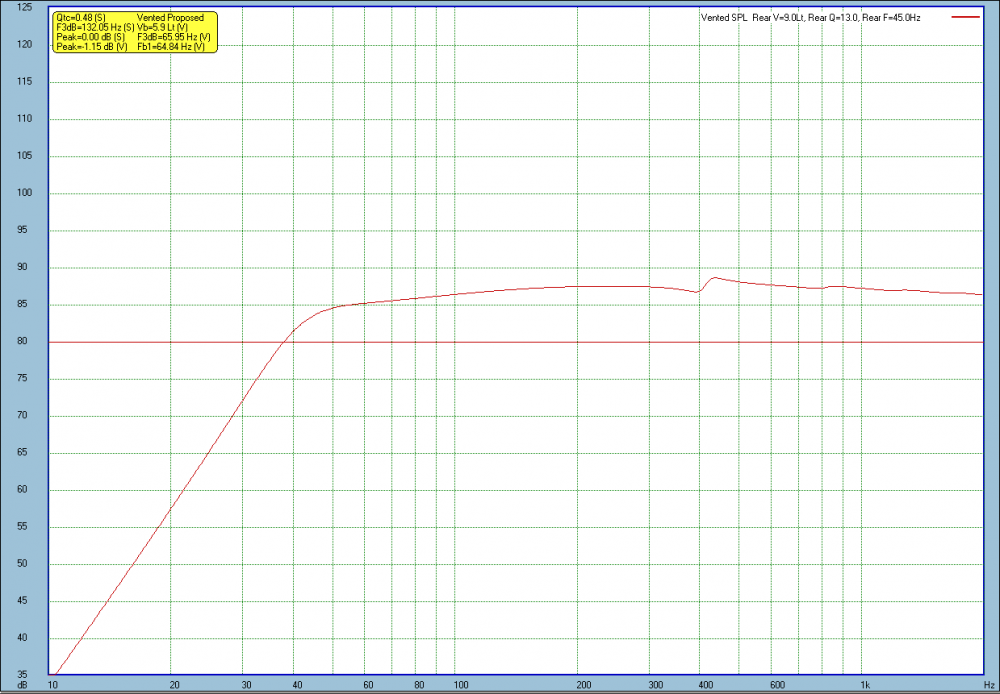 The tweeter is a Motus UH25CT1, found on Canuck Audio Mart for I think CAD$100 for the pair. Completely unobtainable today, unfortunate as it is a great performer and somewhat unique. When it arrived I had forgot it was a neo driver due to the size, and was surprised to pick it up and it was very light weight. It turns out that Motus in their wisdom, instead of spending a lot of RND time designing cleverly shaped non-resonant chambers, solved the back wave problem by simply making the rear chamber very large. It has a larger than average face plate, and a thick plate that hides the screws on the rear side which gives this tweeter a unique and clean look. That is if you could ever keep it clean. The matte finish is like 400 grit sandpaper, breathing near it leaves a mark. But I had a plan, eh! 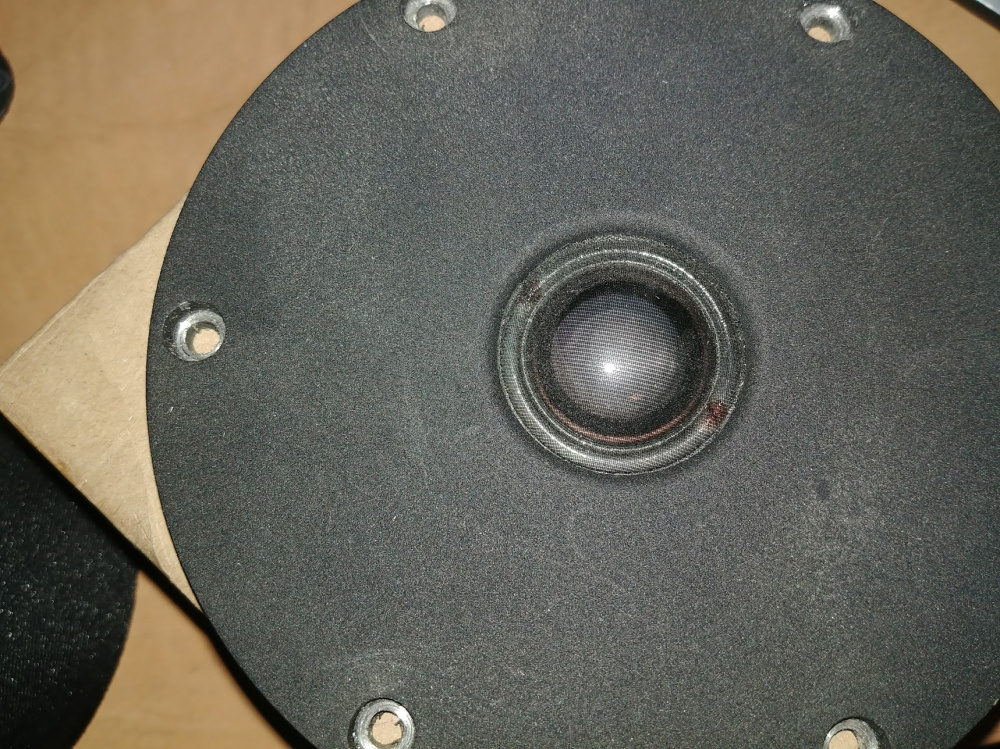 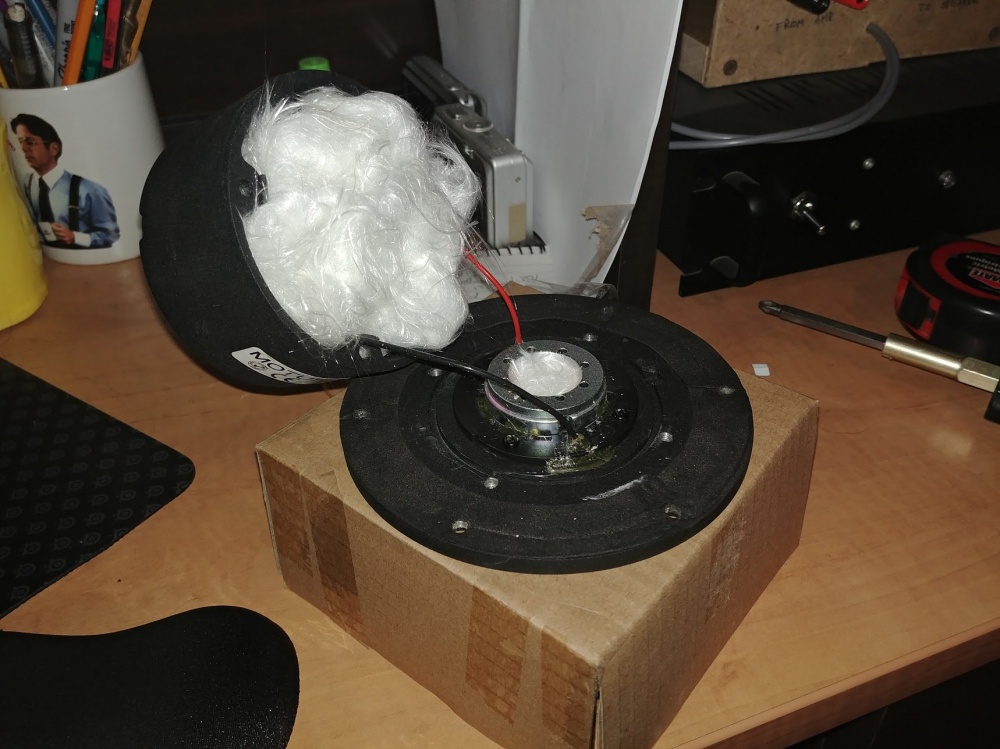 I had always wanted to try the Visaton WG148 waveguide, and this project was a good fit. The tweeter has a completely flat plate, so attaching the waveguide was easy. This dome is a bit small for the waveguide, as it’s a real 25mm dome, and the throat of the guide is more like 38mm, but the flange of the front plate meets up with it nicely, and the resulting response is perfectly usable. Visually the waveguide is a good pair for the woofer, very similarly sized at 148mm vs 152mm, and it also puts the acoustic offset between the drivers at near zero.

For the cabinet finish I used a Di-Noc faux wood “Bubinga” product. It’s not cheap, but application is quick and easy compared to real veneer. Just peel and stick and enjoy. It’s very thin so you do have to make sure the serface is very flat and clean, any spec left behind when you stick this stuff down will be a permenant bump in the gloss. As a gloss vynil its also somewhat fragile, easily scratched so handle with care. 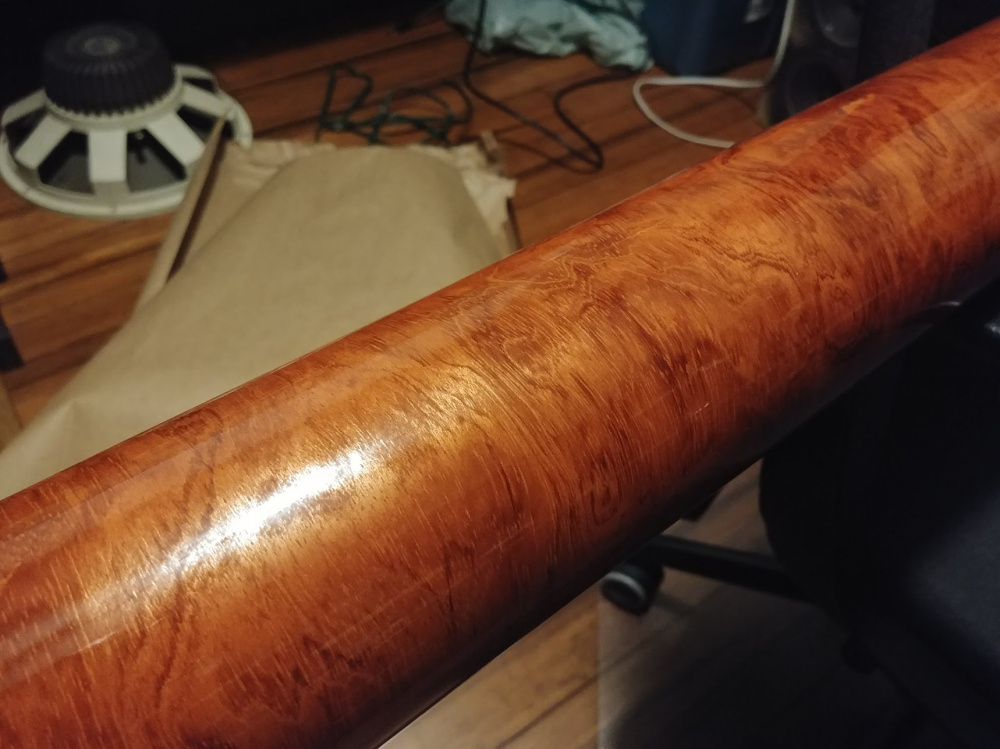 The baffle and rear are finished with Rustoleum “Multitexture Aged Aron” textured spray paint. Nice stuff but a can doesn’t go very far, much less coverage than regular spray paint. The result is like sandpaper, so it was top coated with satin clear coat to take down the grit a bit making it easier to clean and more durable.

This cabinet is rear slot ported, the slot is the entire width of the cabinet and runs all the way to the top, 3/4” open at the bottom out the back, and 3/4” open at the top into the enclosure. Nice when the math works out like that.

There were numerous “happy accidents” made putting these together, but I won’t go into details on that so you’ll never know how bad I really am at cabinet construction. Yes, there is a cross brace between the midwoofer and tweeter, not shown above. The mitre cuts didn't take much longer to do that butt joints, and I think the assembly was a fair bit easier, if you notice how many clamps I didn't use.

Onto the design. I started out trying to use 2nd order slopes, because I am using a high end tweeter in a waveguide it should be able to handle it. It did, but in the end I was able to achieve a better response and sound with the classic 4th order L-R.

Here’s what I had to work with, raw driver measurements in-box.

And here’s the modelled response in my design.

Now that the speaker is complete and assembled, here’s the measured gated response overlaid on the simulated design.

Not a bad match

A photo of my crossover assembly, this photo is missing an extra resistor that came late and makes the magic happen. I didn’t take a new photo after installing the last part. 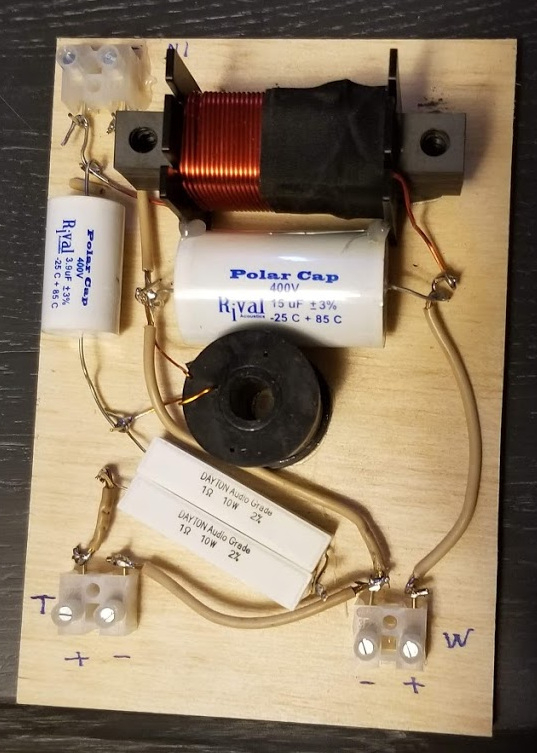 But how does it sound? Great! This has everything just right, and while the NHT Xds is a great speaker, they sound wimpy and thin next to this pair. The low end has authority and punch, and the midrange through the treble is effortless. There’s nothing missing or lacking or anything that stands out, just music as it should sound, and with the weight and tone that I prefer. Sometimes getting the tweeter dialed in just right can be tedious, but not this time. Maybe I’m just getting better at this