Volare - A nice, simple two-way design or is it the Catalina "frickin" wine mixer?

My younger son started college this year. As his dorm room lays out, he has a nice location for a flat screen TV and pair of speakers except that it is a relatively shallow ledge along one side of the room. I built the "Hafnium" speakers for him a number of years ago, but those are over 10" deep and rear ported which just doesn't work for his current situation. At fall break, I sent him back with the Rhodiums, but there are shelves full of drivers, so there is no reason this problem can't be solved with something a little more substantial.

One thought I had was something with a similar form factor to the Advent Baby, which was about 16" tall, 11" wide, and 6" deep. Given that these are going on either side of a TV, I also considered something taller and thinner and taught myself enough rudimentary sketch up skills to do a visual comparison. 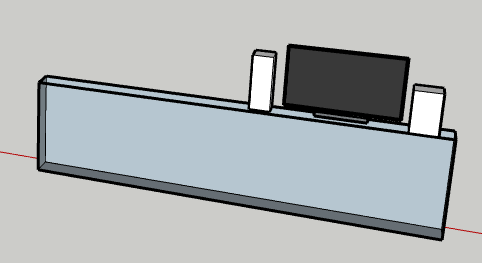 We both preferred the tall, skinny form factor. The next step was to pick some drivers. I have a pair of SB Acoustics SB13PFC25-4 woofers that are happy in about 7 liters tuned to 60 Hz. For tweeters, we have a fair amount of baffle area to work with, so it seemed that something with a full-sized flange would work well aesthetically. I thought about Peerless/Vifa/Tymphany XT25 or DX25 variants, but I also had a pair of Seas 29TFF/W sitting on the shelf as a 5 year old door prize. I haven't seen them used much, so thought this would be a good opportunity.

True to the initial Advent Baby, the concept includes black baffle, sides, and rear with woodgrain top and bottom panels. Given the ledge these will occupy, a rear port is probably not an option - so there will be a front port below the woofer. More details to come...