ScottS
February 2018 in DIY
It's been a pretty cold winter, which has delayed some planned projects.  This situation has presented an opportunity to dig further into the HiVi DIY 3.1's that I picked up shortly before DIY Iowa in 2017 and brought along for a quick demo.  My pair painstakingly finished in primer for the show,is shown here. 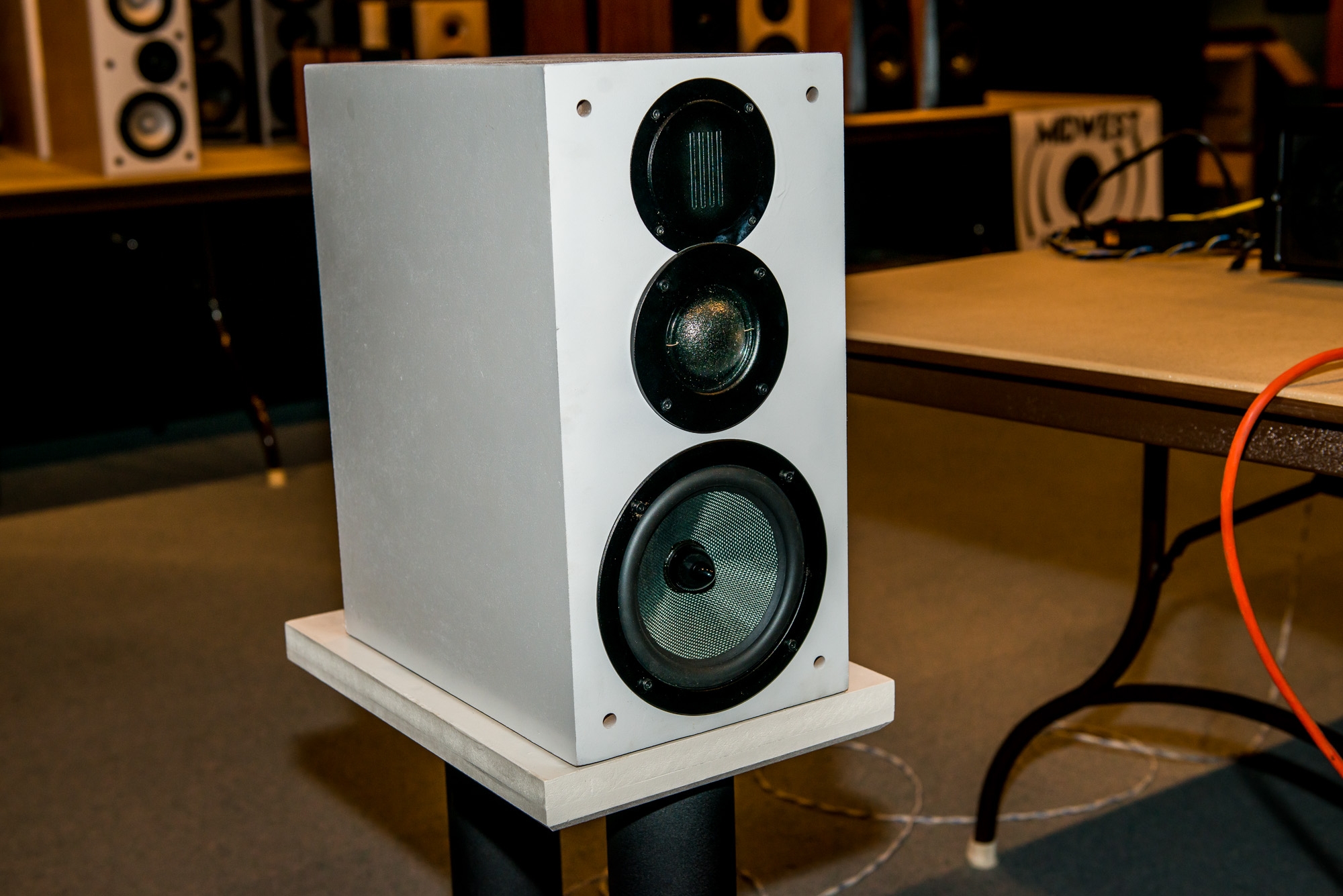 This kit is still available on Amazon for $249/pair including knockdown cabinets with free shipping.  Some of the reviews indicate that the overall sound is a bit bright, but can be corrected by increasing mid and tweeter resistor values.  Rich (Turn 2) had done this to a pair that he also brought to the Iowa show, but a wiring error led to some strain on the mids - so we stopped the demo early.  Rich indicated that he had modified the resistor values.

I wanted to start by measuring the stock FR. 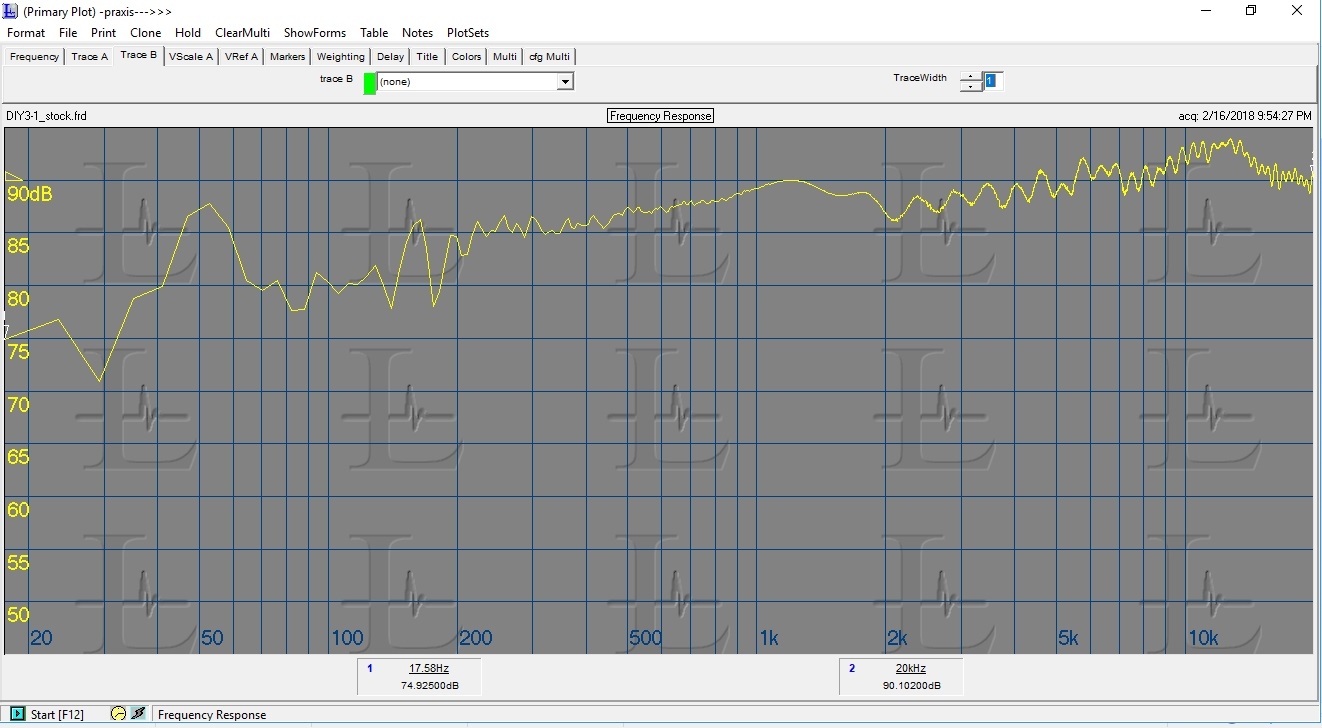 This actually looks almost identical to what is posted on HiVi's website (but using a more revealing scale).  I didn't splice in any low frequency nearfield response, so anything below about 200-300 Hz is not accurate.  I guess one could call the response 89 +/- 4 dB without really lying - but most of the 8 dB variation is a steady rise from 85 dB in the 200-300 Hz area to 93 dB around 12 kHz.  I would expect this to sound a little bright and, to my ears, it does.

The next step was to unhook the individual drivers from the crossover and see what we are working with.  The woofer is the L6-4R (4 ohm), which is the same model number sold by Madisound and Meniscus.  The in-box FR is remarkably well behaved with a very smooth rolloff starting between 2 and 3 kHz. 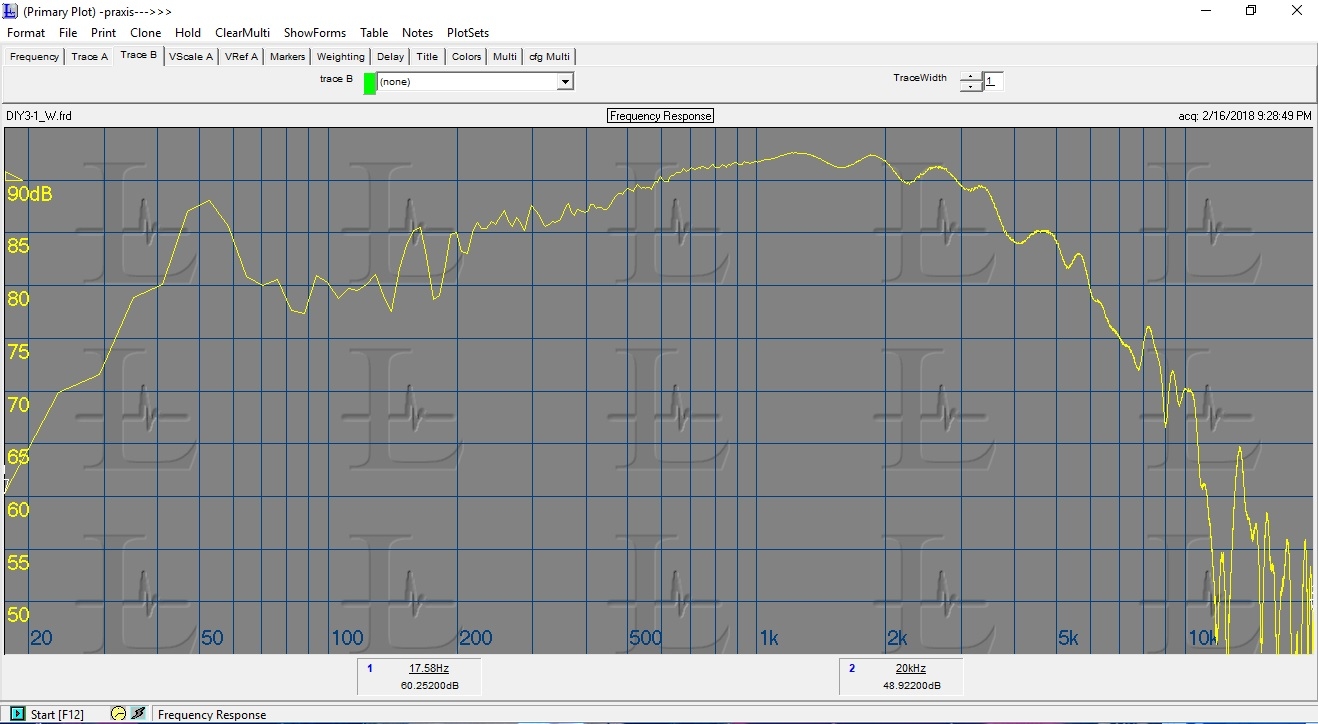 The in box impedance plot shows that the cabinet is tuned to 50 Hz.  There is little else remarkable to note. 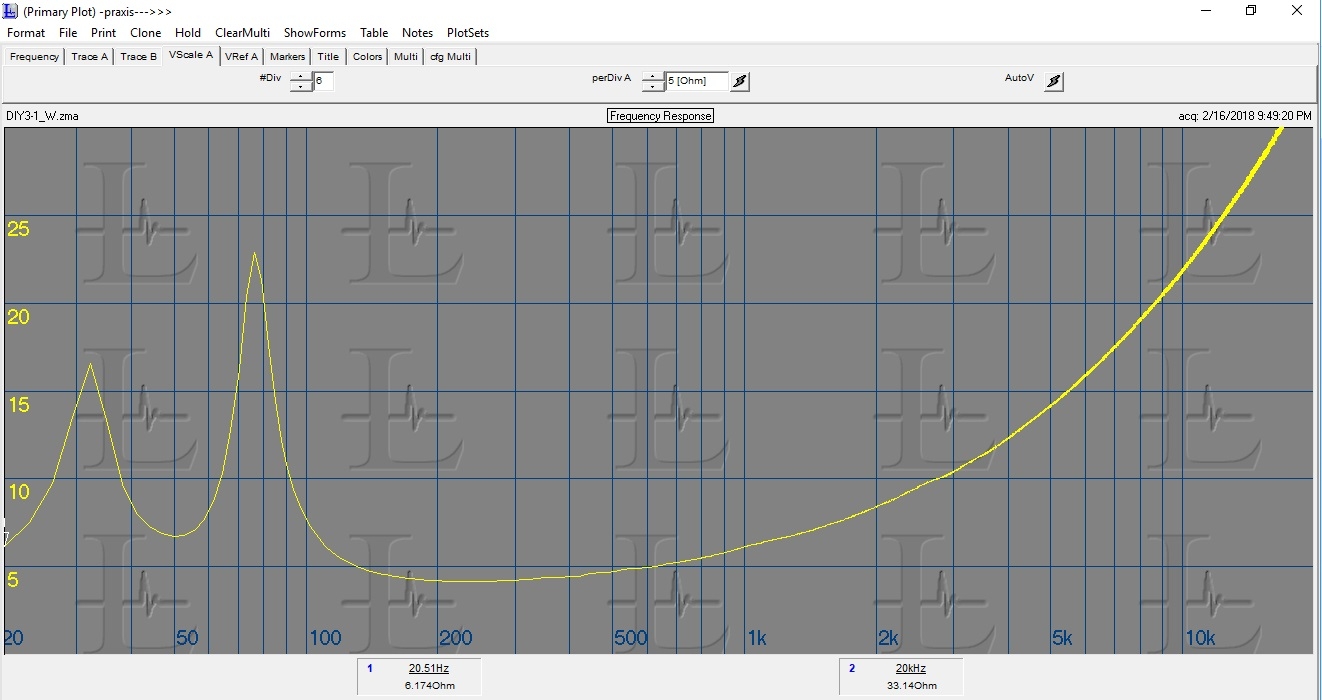 The midrange is the DMN-B.  I used the DMN-A in my recent Indium 7 project and really liked it.  Physically the only difference I can readily observe is a 4 screw flange vs. 6 screws for the DMN-A.  6 screws would have limited the overlap between the mid and tweeter flange, so maybe that is the reason.  The frequency response is very similar to what I measured for the DMN-A with minor differences likely due to cabinet geometries. 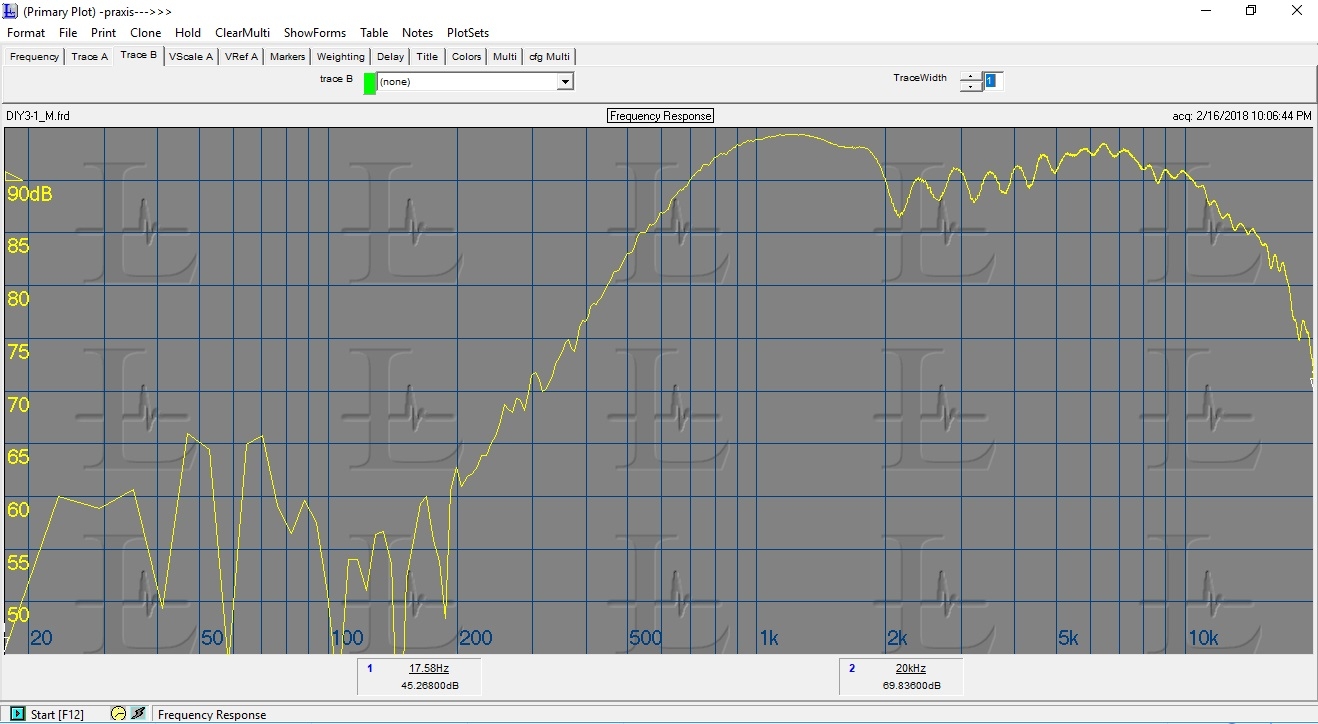 Impedance is also similar to the DMN-A, including the published Fs of 850 Hz. 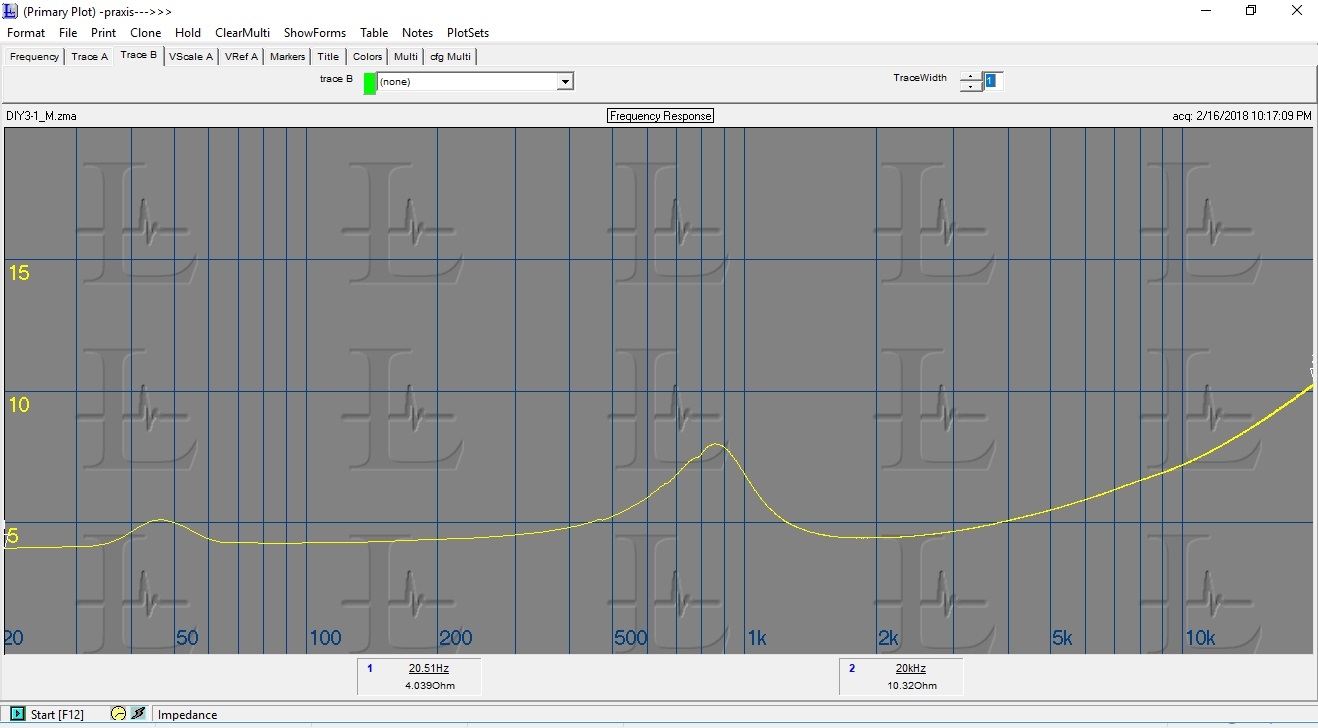 The tweeter is the RT-1.3B.  I have heard the 1.3 before, but have never worked with it.  The faceplate is different from the standard RT1.3, presumably to help with the physical overlap between the mid and tweeter flanges.  The frequency response is pretty well behaved, which isn't a given for a planar tweeter.  There is a slight peak at around 12kHz, which also showed up in the overall speaker response. 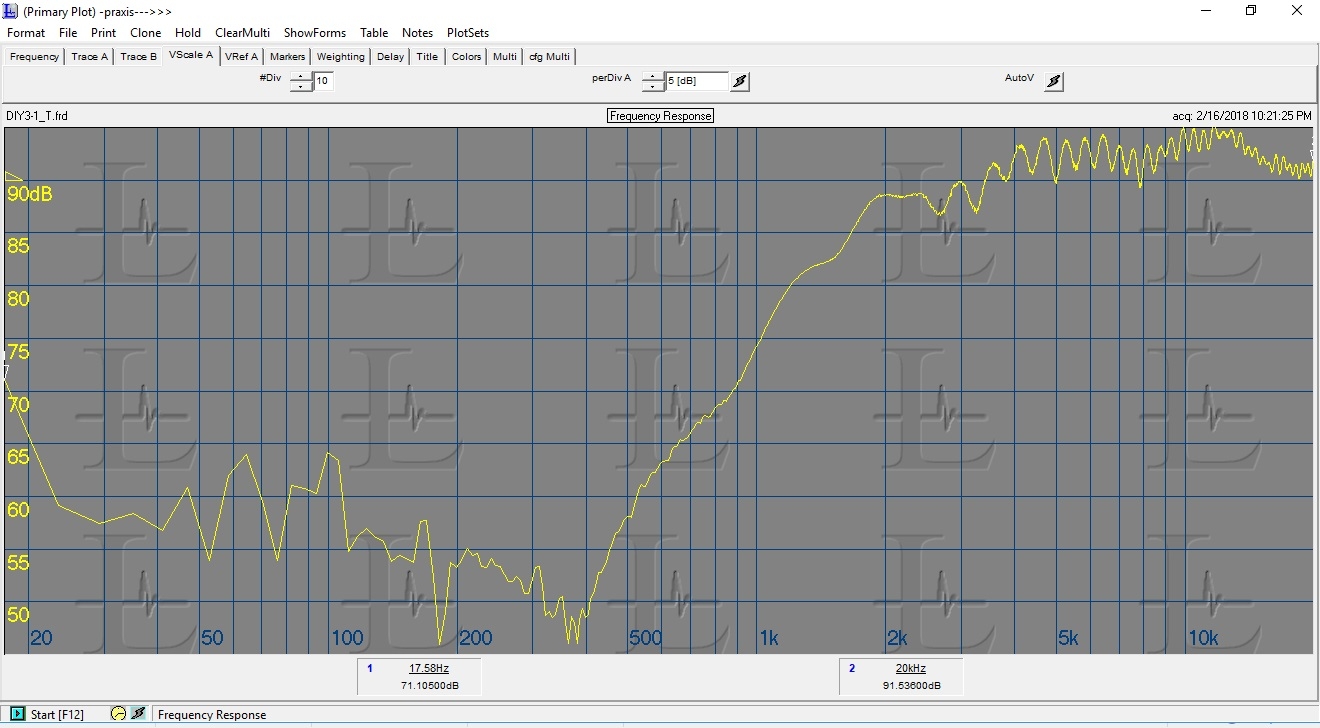 Impedance is pretty much a flat line at around 6 ohms, as one would expect from this type of tweeter. 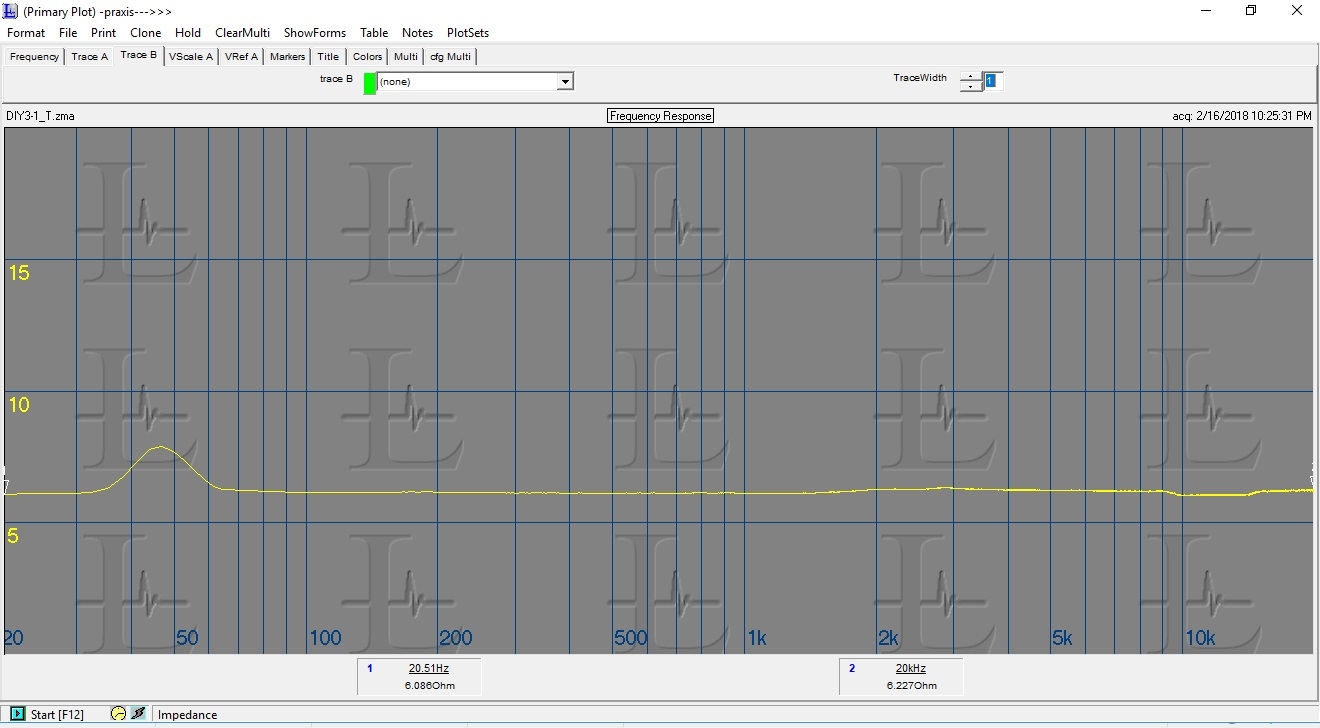 The next step will be to use the measurements to simulate what it would take to balance out the response.