jr@mac
October 2019 edited October 2019 in Related
So as I mentioned elsewhere, I will be bringing a pair of commercial speakers to the IowaDIY shindig. I unboxed them last night (holy shit that shipped fast - 2-day shipping on a nearly 30# package, all-in for less than $80) and was generally impressed with their overall build quality.

View from the front: 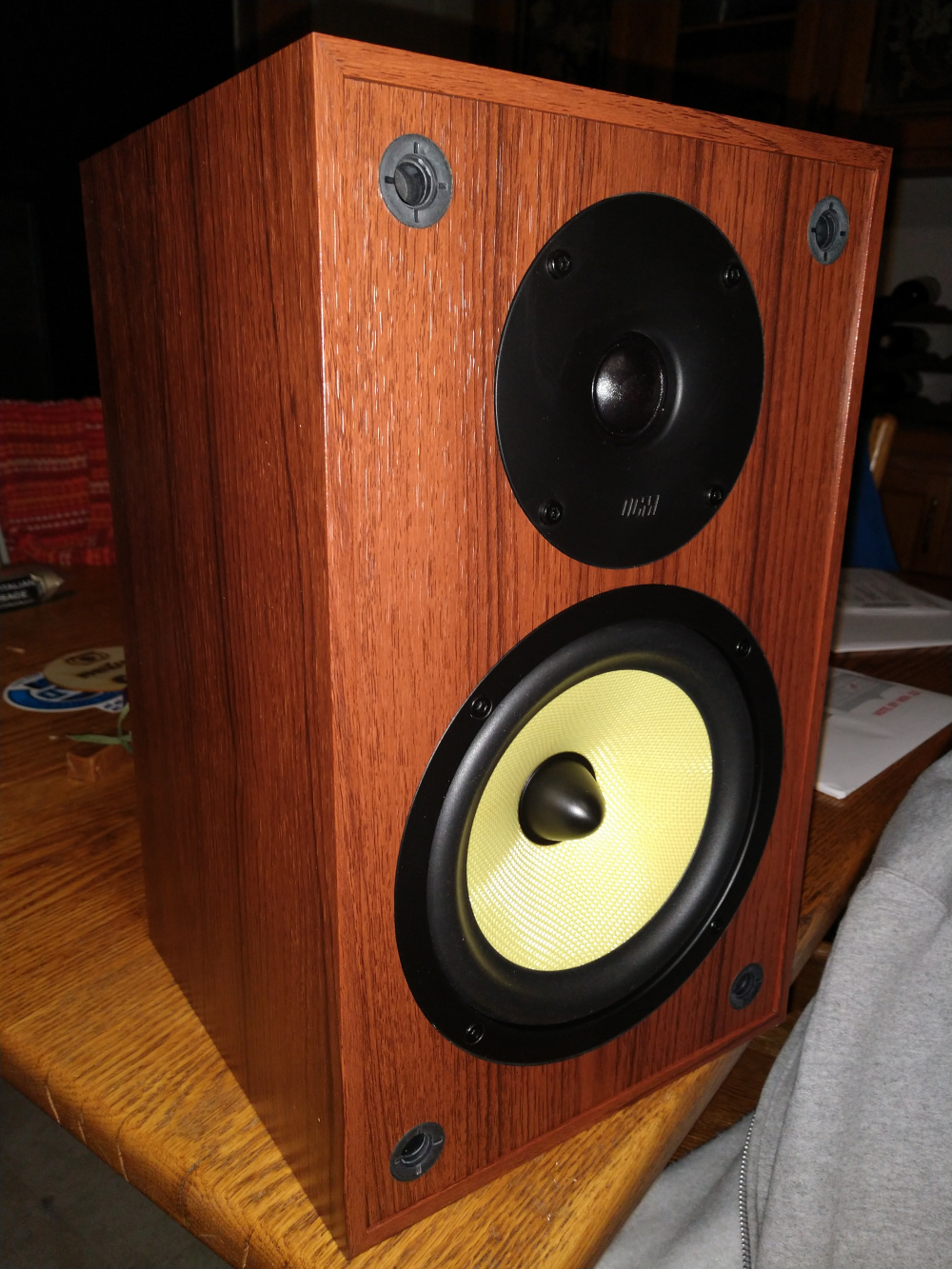 The drivers use typical cutout sizes - a true 6.5" on the woofer and a true 104mm on the tweeter. Pictures elsewhere show the tweeter to have a real motor - it isn't a typical $4 neo dome glued to a big faceplate. The woofer has a fake phase plug, but the woven cone is quite attractive If yellow is your thing), and the surround has a high-end look to it. It isn't your basic 1/2 roll, it actually has that "taper to the cone" look to it, reminiscent of the geometry used on, say, an Usher - if that makes sense. Overall, it is not a bad looking speaker out of the box, but the tweeter does look cheap. 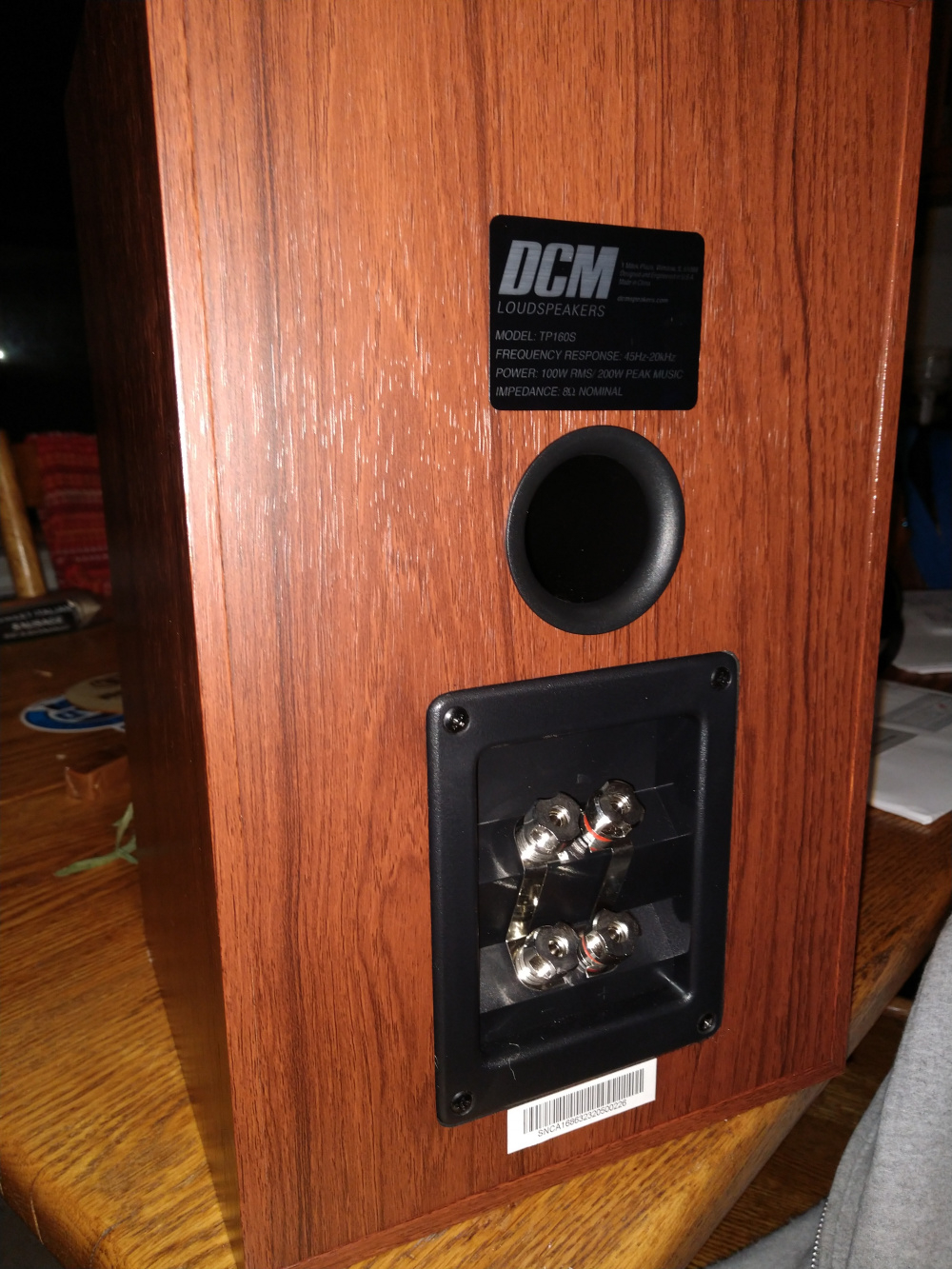 Port is undersized, but the binding posts are decent enough. Advertised as "45 to 20kHz". Otherwise, nothing else to note.

So set my mic up, and took some squigglies.

First up is the on-axis with and without the grill: 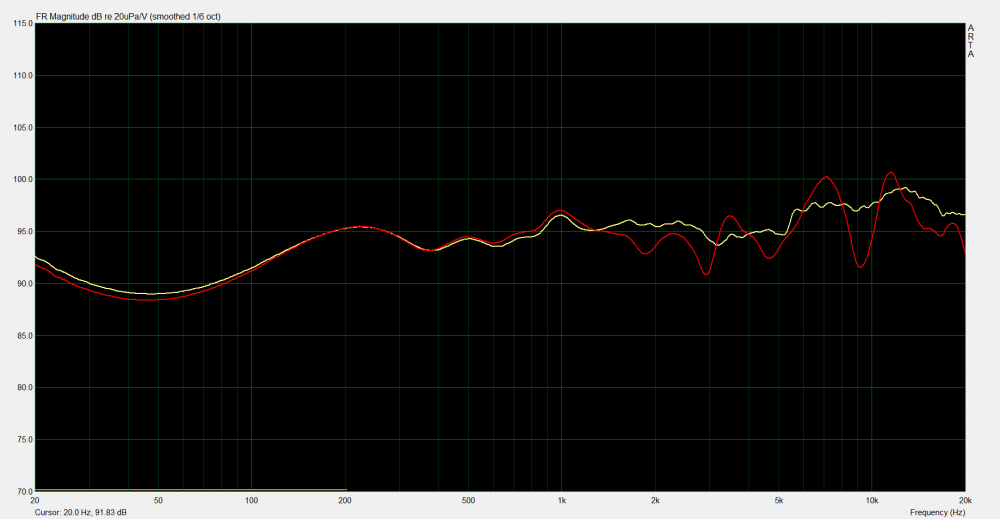 Care to guess which measurement includes the grill? Give up? The red. The red sweep used the grill. Seeing the lofting top end leads me to believe the claims of a copper cap in the tweeter are true. Otherwise, it appears minimal baffle step was used in the crossover, although top end energy is overall reduced with the grill in place - but the resulting emphasis at 1K and the peakiness in the 6-15k region may result in considerable overall coloration. The response is fairly smooth with the grill off, however. This is the only measurement I took with the grill on. If someone set these around some boundary reinforcement, toed them in, they would likely be pretty acceptable. Out on a stand, in a reasonably well set up listening space they would be shrieking harpies.

Here is a distortion measurement, SPL accurate at 1M: 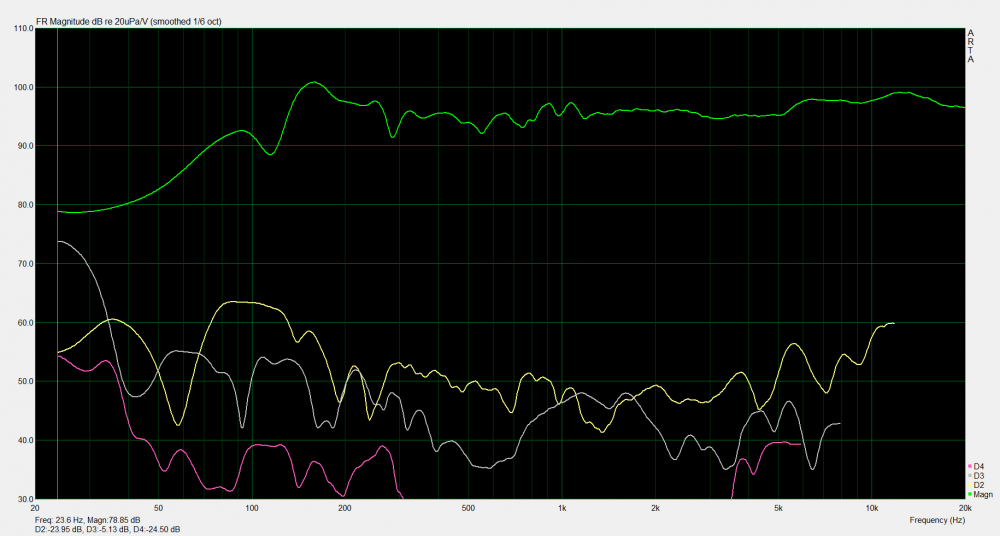 Largely second order dominant, with a rise in 3rd order in the 500 to 3k range typical of bread and butter woofers. These play very, very loud. At these levels, I generally have ear plugs in. Port chuff was a serious issue at this level, and likely to be noticeable on louder than average listening. In all honesty, I have measured DIY designs of my own using woofers that cost close to what this assembled pair cost that have worse distortion.

Here are the horizontals out to `45 degrees: 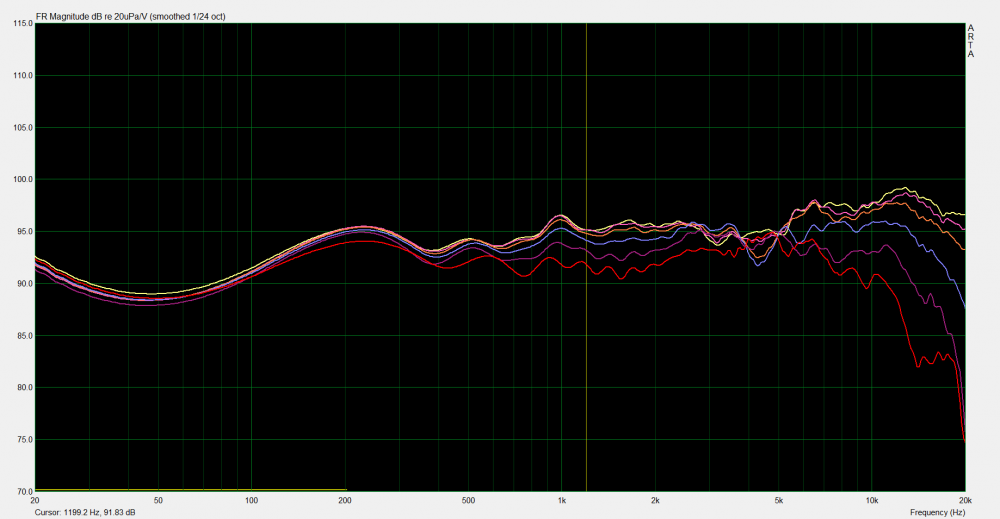 Read into that what you will, but at no point do I see anything surprising, other than the blue curve (approximately 22.5 degrees out) might be the best bet for listening axis. There is a weird suckout there that fills in as you go further off axis. I should have averaged these curves out, but I didn't. So lay off me, guys, this is a damn hobby. I shudder to think what the grill did to the off-axis. The grills do look nice, however.

I took a single point about +30 degree in the vertical, to see if the crossover point jumped out. It did. 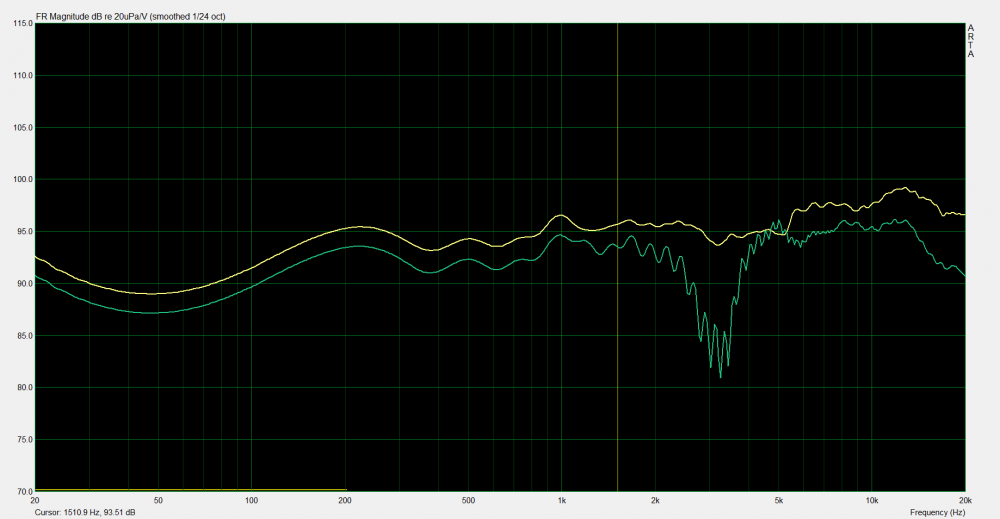 Looks like a basic 4th LR around 3200, but without extensive reverse engineering the design I can't say with any certainty what the slopes are. It just looks that way, that's all.

Oh, and an impedance overlay: 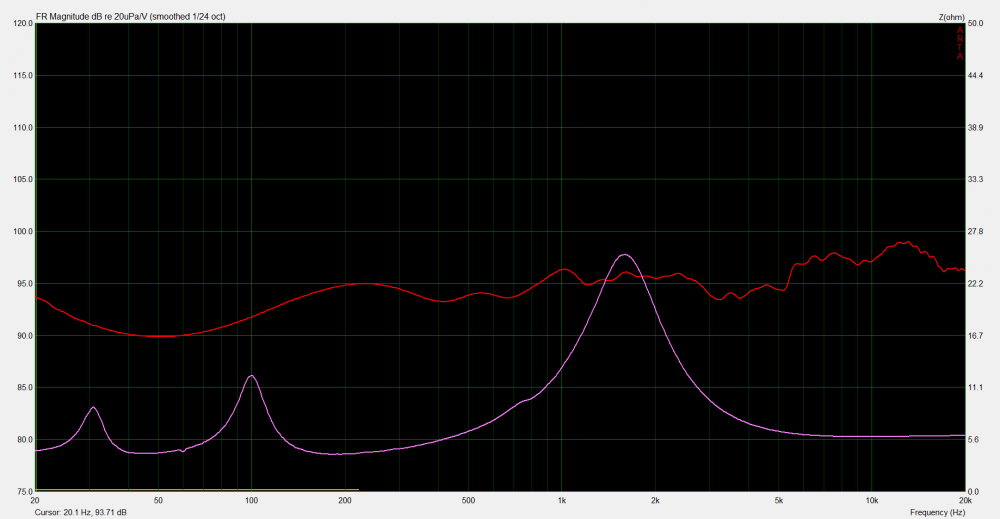 Looks under-tuned at around 40Hz, if you subscribe to the 0 degree philosophy of determining box tuning.

All in all, if a guy wanted to stick these in a corner they should perform pretty well. I'm not the guy to stick baby in the corner, so I hope to have an all new crossover for these. Maybe tomorrow I will pull the drivers, and get individual measurements, copy the stock crossover network, figure out the predicted bass response, and work up an improved crossover. Take some pictures of the internals, etc. Typical "kill 1/2 a bottle of pre-tariff single malt" stuff.

Or, if someone wanted to just use a basic three band EQ and dial down the mid and treble band a few db, they would probably satisfy most normal people out on stands. These are a pretty good fucking value at the $80 clearance price, to be honest. At the original $300 or whatever, not so sure - that is an increasingly competitive slot to be in.

I doubt I'll do any listening to the stock crossover, I've been doing this for a very long time and can basically hear them in my goddam head already, so I'll mock up a new crossover instead.